Great job chance for Polish pilots, to come in Serbia where they would be welcomed and not far from Poland

Crow
25 Dec 2015  #1
Let me announce with pleasure.... Great job chance for Polish pilots, to come in Serbia where they would be welcomed and at the same time not far from Poland. Much better to come to Serbia then in western Europe or over the oceans. Here, you Poles would be respected.

As it is said in the article below, Air Serbia would offer jobs for up to 30 pilots because of new transatlantic flights. In total more then 120 jobs in this field would be offered.

Please share info on other Polish portals. Pilots are occupations in demand in Serbia. Chance for Poles is real. Language not problem. English required (every professional pilot knows it anyway), Polish and Serbian are similar.

IF YOU ARE PILOT IN POLAND WITHOUT JOB SEND YOUR CV! BE PART OF TEAM WITH GREAT FUTURE!

Also, in Serbia Polish pilots, I am sure, would be given due respect for their skills unlike in Britain where they would not even be recognised, oh pardon me, they would be recognised as cleaners.
Poor Ktos. Living in Australia, he obviously doesn't know what an EASA licence is. Here's a clue : European pilots have EASA licences, not national licences.

But, reason that i shared this info, in first place was to inform qualified Polish pilots that don`t have all-time job. Sure, Polish pilots that work for other air-flight companies also can send their CV to Air-Serbia. Its up to them.

The aviation industry in Poland is not "worse than ever" - quite the opposite.
i absolutely agree that LOT have future. Via codeshare agreement with Air Serbia, LOT gained practically unlimited market and logistical opportunities (former Yugoslavia, Non-Aligned countries (worldwide), China, Russia and former Soviet Union). i would go that far to say that right now Air Serbia bail out LOT. i like it. Let God give that Poles and Serbians control some of most profitable money flows of Europe, as it was case with our ancestors in the morning of Western world.

Great chance for Polish pilots looking for work but having no luck in Poland where aviation industry is worse than ever.
i think there are reasons for hope.

Then, Poland is big country and i am sure that Poland have quite enough qualified pilots to satisfy demands of both- Poland and Serbia. 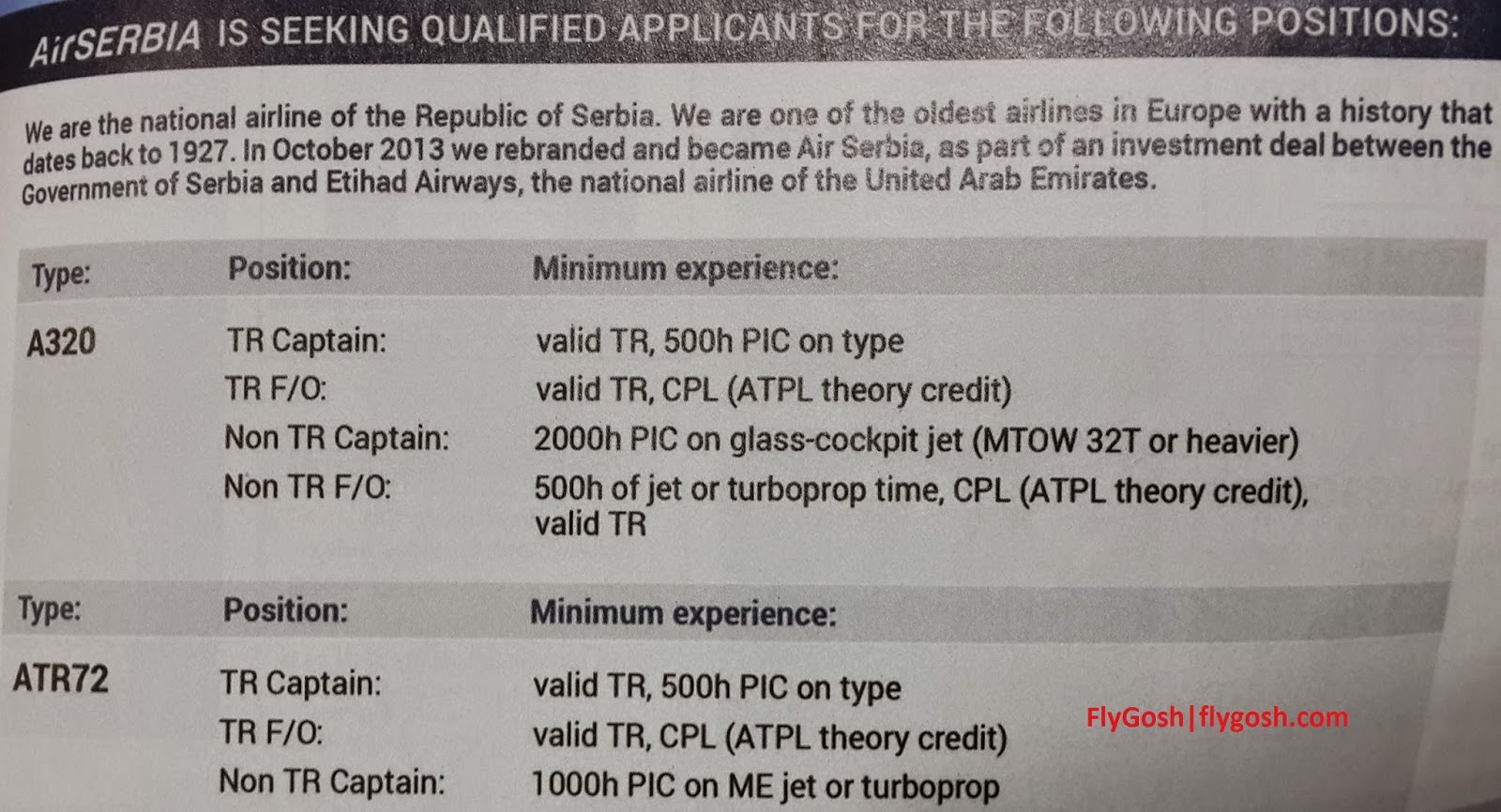 Air Serbia Theme Song - The Wings of Europe
youtube.com/watch?v=hN8Nivmu5DM
Ktos
26 Dec 2015  #5
LOT have restructured very well, and with restrictions on route expansion about to be lifted, they should do very well.
Do not tell me about LOT, it is a long standing Polish aviation company that you would not have any idea about, but I do, it is doing badly, it was better off under communist system which is laughable but that is the sad reality.

i absolutely agree that LOT have future.
Yeah, it has future with right moves, and yes Serbia is bailing it out, those westerners do not know what they are talking about, but I do not write to them here anyway.
weeg3
26 Dec 2015  #6
not far from Poland
Crow, that isn't much of an issue if you are aircrew. For instance, I know a pilot with a Honk Kong based airline who lives in California. His commute is across the Pacific. EU based aircrew can live, work and pay taxes in any EU/EAA based country they choose.

Serbia isn't in the EU yet, is it? So offering these jobs to EU citizens takes away one of the few well paid jobs available to Serbians who want to live in Serbia.
Ktos
26 Dec 2015  #7
I think this for Serbians to decide not westerners or "great" EU members. In any case, Serbians can likewise find opportunities in Poland for jobs or business ventures that may not be available readily in Serbia.
Crow
26 Dec 2015  #8
Crow, that isn't much of an issue if you are aircrew.
yes, you are right. On the other side, Poles who live in Serbia are closer to Poland, at least in cultural sense. Then, there is no humiliation of Poles here. Only respect on Poles, having in mind all historical and cultural connections. Absence of that pressure in direction of assimilation. One who is Polish and by his experience is able to compare Serbia to western Europe, in Serbia can found true freedom, actually.

Serbia isn't in the EU yet, is it? So offering these jobs to EU citizens takes away one of the few well paid jobs available to Serbians who want to live in Serbia.
True. Not yet annexed by EU. Anyway, if Air Serbia announce these jobs opportunities in international newspapers in English, it obviously means that there is the demand for pilots. i understand this. Its because of rapid growth of the company.

Don't you understand the fundamental purpose of the European Union?
Crow
26 Dec 2015  #10
Thats solely the decision of the Polish government to make whether non-EU/EEA citizens can visit and business can operate within Poland.
Strict administrative decisions are for the people without imagination.

Don't you understand the fundamental purpose of the European Union?
assimilation?
weeg3
26 Dec 2015  #11
Serbians CAN found opportunities in Poland.
As smugglers and criminals. People with "imagination'.

Nice aspiration.
Crow
26 Dec 2015  #12
As smugglers and criminals.
everything is legal, i assure you. People have correct papers.
pweeg3
26 Dec 2015  #13
People have correct papers
Of course, paid to show that Polish apples were grown in Serbia, all legal.
Crow
26 Dec 2015  #14
Western Europe force us to be elastic with regulations. See, papers shows that Polish apples were grown in Serbia in situation when other papers shows that Serbia as a country even don`t have that much land planted with apples. Only higher mathematics convincing Russians that are apples Serbian.

On Belgrade`s airport Polish LOT is promoted as only air flight company in the world that in all intercontinental flights offering services in airplane Dreamliner (Boeing 787), what is considered to be most advanced passenger plane of our time.

new job opportunities for Poles in Air Serbia. Hurry, hurry up, come. Here`s better then in western Europe. Extra bonus come in life free from humiliations and assimilation what is usual for Poles living on the west of Europe, Australia, USA or, God forbid- in Canada. 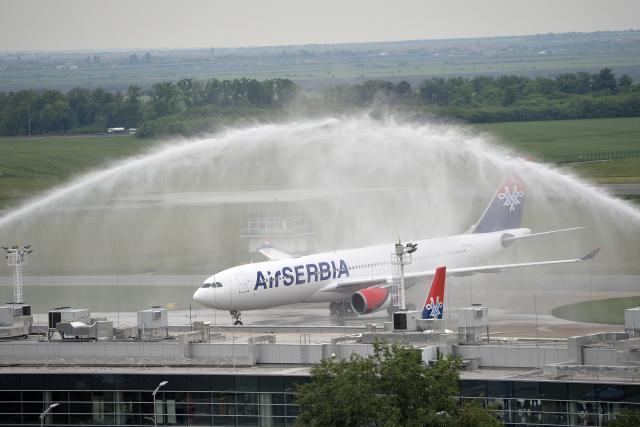 The plane will be used ........ a non-stop service from Belgrade to New York starting from June 23.

Poles and Serbians in business. From the last year`s signing of cod-share agreement between LOT and Air Serbia
Crow
27 Dec 2016  #15
Pilots, don`t forget to apply for job