I have the experience that you must counter rabid things like spike with brunt force. A boot on his head does the trick.

There is no need for kindness to things like him.
dolnoslask
4 May 2019  #153
. A boot on his head does the trick.
Please carry on fight it out , but I wish you and spike and others would stop disrespecting Poland and Germany just to win points.
Weimarer
4 May 2019  #154
he cant disrespect Germany. We have a saying here.

Which means: The german oak doesnt care if a swine rubs its back on it.
Lyzko
4 May 2019  #155
Aka "Sticks and stones can break my bones, but names can never hurt me!"
Good shot though, Weimarer:-) Until the last German's left standing.
dolnoslask
4 May 2019  #156
he cant disrespect Germany. We have a saying here.
Then you can't disrespect Poland so its quits then, don't you agree.

But please carry on with the personal insults it's entertaining
dolnoslask
4 May 2019  #157
I have to test my bravery
Really lets hope that your or spikes kids never have to ask their mum why dad shouts and screams during the night, the answer being because of the war.

Bravery is never in question the horror that conflict brings will be your nemesis, both of you.
Weimarer
4 May 2019  #158
Realy? I think war is as important as peace. We had peace for far to long. A society that knows no war gets weak and soft.

Pinochet said it right. Democracy must be bathed in blood from time to time.
delphiandomine
4 May 2019  #159
Really lets hope that your or spikes kids never have to ask their mum why dad shouts and screams during the night.
The comforting thing is that their ideology is very much in the minority, both in Poland and in Germany. The vast majority of Poles and Germans never want to see war again, and nor should they.

People like your dad fought so we could have peace, and for that, I'll always be in their debt.
Spike31
4 May 2019  #160
Please carry on fight it out , but I wish you and spike and others would stop disrespecting Poland and Germany just to win points.
I'm not "disrespecting" Germany. I'm just putting light on our relations from a different perspective. I provide facts and link to sources and I add my private opinion to which I am entitled. The rest is for the readers to judge.

So be so kind and don't place me on the same shelf as some poor lost soul who came here to throw helpless insults.
dolnoslask
4 May 2019  #161
Realy? I think war is as important
Well you toddle of then and find one there are plenty going on at the moment, but don't ever expect to see Poland and Germany at war anytime soon, after all both our nations have in the last century proved we are $hite at fighting wars , we have cemeteries full of dead people, that sadness and loss we both share.
dolnoslask
4 May 2019  #162
came here to throw helpless insults.
I take on what you are saying but we must not allow this to become a Germany Poland thing, Weimarer is taking this overboard with his "bathed in blood" comments, time to leave him alone , I respect your right to your opinions, I hope you respect my concerns as to where all this is leading.
Spike31
4 May 2019  #163
The vast majority of Poles and Germans never want to see war again, and nor should they.
I don't want to see war either since I don't see any benefits of it, especially now in Europe, and Poland is doing quite well in times of peace. But that doesn't mean that we should submit our national interest to avoid any tensions and political conflicts.

There's an old and wise Roman saying : Si vis pacem, para bellum which translates to "If you want peace, prepare for war" . Which means that only the strong are safe because it's unwise and unprofitable to attack them.
Weimarer
4 May 2019  #164
@dolnoslask

Seriously? I came to ask a question about a village called Kuhnersdorf, then some polish ******** come and insult my nation and my people.

What i can say about this spike thing, if you happen to drive through my state Thüringen and have a car accident, it could well be that i´m one of those who pull you out and try to safe your life, even so you are just an idiot. Because thats part of my job.
dolnoslask
4 May 2019  #165
What i can say about this spike thing,
You could just say it's one or two guys you are having a problem with here, no reason to overreact and generalise about a whole nation, in the same way I do not take some of your comments to heart and generalise about the German people.

I am glad you would save my life in a car wreck, plenty wouldn't, thanks for listening and talking, bed time now.
Rich Mazur
4 May 2019  #166
The vast majority of Poles and Germans never want to see war again, and nor should they.
Weimarer is correct. Poles and Germans never want to see war again because they still remember the last one. The young morons in the US love socialism only because they never experienced it. When, one day, they will, it will be too late.
Miloslaw
4 May 2019  #167
Weimarer said;
"I think war is as important as peace. We had peace for far to long. A society that knows no war gets weak !"

Really???
Only a true Nazi could come out with a statement like that!
Ziemowit
4 May 2019  #168
he's not any more German than Rich is Polish, it's another Mario troll...
Wow! Now that you've said that ... I can see there are striking similarities between Mario and Weimarer! Do you remember pictures of 'Mario the athlete'?

Just go a few posts back and ... you will see that Weimarer's comprehension of German isn't that good. When he was told that "Mohammed is Berlin's most popular first name given for newborns", and given a link to that in the morgenpost.de, he quickly denied the news saying that his adversary can't even read his article where the most popular names indicated were Paul, Alexander and Maximilian. But the MorgenPost quoted those names as coming from the deutschlandweite Gesamtliste (all-German list) of all names (since parents give children more than one name), but when first names only were taken into account (zählt man ausschließlich die Erstnamen), then Emilia and Mohammed were most popular names given for newborns in Berlin (dann liegen in Berlin Emilia bei Mädchen und Mohammed bei Jungs an der Spitze).

Weimarer couldn't work that out! /off-topic/poland-european-news-84693/3/

I love my country but also have friends from other countries. In brazil, chile, usa, australia. I treat those with respect and respect their countries and i expect same.
mafketis
4 May 2019  #170
I can see there are striking similarities between Mario and Weimarer!
I'll admit I didn't realize at first (and it might not be Mario himself, but.... phony troll identity.... I'll bet money on that.

There will never be friedship between nationalists.
Nationalists can get along when borders are clear and accepted. It's the globalists who are always shoving their noses up each others' @ss3s...
Miloslaw
4 May 2019  #171
. I treat those with respect and respect their countries and i expect same.
Then show some respect to Poles on a Polish forum.......
Weimarer
4 May 2019  #172
I show respect when respect is shown.
Miloslaw
4 May 2019  #173
Read back through your posts and you will find why you are wrong..............
Joker
5 May 2019  #174
The young morons in the US love socialism only because they never experienced it. When, one day, they will, it will be too late.
A generation of helicopter parenting, participation trophies, the ones that paid for their kids college to graduate with worthless social justice degrees.

The only people that can't find a job in todays booming economy. Haha

I hope, you guys can actually get your act together one of these years,,, com on already??? Please don't start another world war again:)
Weimarer
5 May 2019  #175
The time for Trump here is long over.

We need a Pinochet.
Rich Mazur
5 May 2019  #176
Only a true Nazi could come out with a statement like that!
That was harsh. Let me remind you that the US was in the state of war 92% of the time it existed. The US military budget equals 40% of all military budgets combined. That is beyond sick. On that pie chart, it looks even sicker. Our ruling class loves wars because this is how they can justify that sick pie chart. Unfortunately, they are conniving enough to wage them outside of the US to let other people die - not the naive dupes here.

Weimarer is correct again. If the Americans had some bombs dropped on them, their craving to go to yet another war would be gone in less than a minute. Unfortunately, few of them die in some far-away shi*holes to make an impact at home and those who do are brought home as heroes who "defend our liberties".

Weimarer is correct about Trump, too. He is and projects weakness. The RINO's are a pile sh*t, unwilling or incapable of ruling. They a perpetual "opposition party". Dems, as much as I hate these m-f***ers, are fighters and never give an inch. They would be the real NAZIs if we ever got that far.
Crow
15 May 2019  #177
Merged:

an article > upsetting news > act of madman or something else >

Polish ambassador to Israel attacked near his embassy in Tel Aviv
By Alon Einhorn, May 15, 2019 21:09
jpost.com/Israel-News/Polish-ambassador-to-Israel-attacked-near-embassy-in-Tel-Aviv-589731 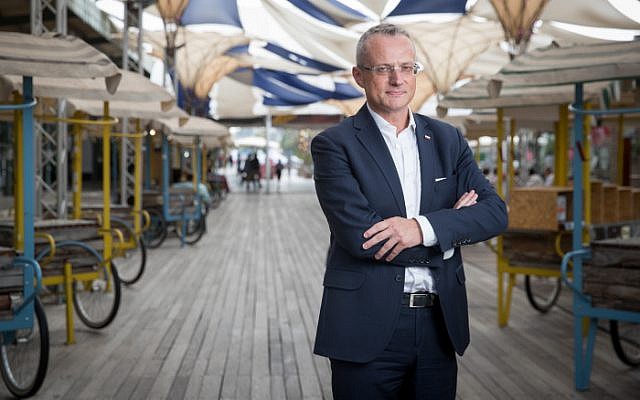 Poland's Ambassador to Israel, Marek Magierowski, was attacked on Tuesday outside the Polish Embassy in Tel Aviv, according to a report by the Hebrew website Ynet.
Lyzko
15 May 2019  #178
If it was concerning S. 447 and the restitution for heirless "lost" property in the Holocaust which apparently the Polish government is dead set against,
such a backlash unfortunately is only to be expected.

I certainly don't condone any violence used to make the point, it should be noted.
mafketis
16 May 2019  #179
restitution for heirless "lost" property in the Holocaust
if there are no legitimate heirs... there can be no restitution... which turns the 'restitution' into 'haracz'
Miloslaw
16 May 2019  #180
such a backlash unfortunately is only to be expected.
Jews should be claiming against Germans, not Poles.
Poles were victims of this war too.
Poles owe nothing to Polish Jews.
They should seek compensation from Berlin or Moscow.
And where did all these Holocaust survivors suddenly spring from?
Not that many survived.... nor would still be alive.
Who are these people?