Crow
25 Jan 2018  #1
My venerable and noble Polish sisters and brothers. Its glad to me to share this wonderful news with you, here on this place of free, on Polishforums. Polish and Serbian presidents met in Davos and Polish president Duda accepted invitation to visit Serbia. For sure, this will deepen relations between our brotherly countries. 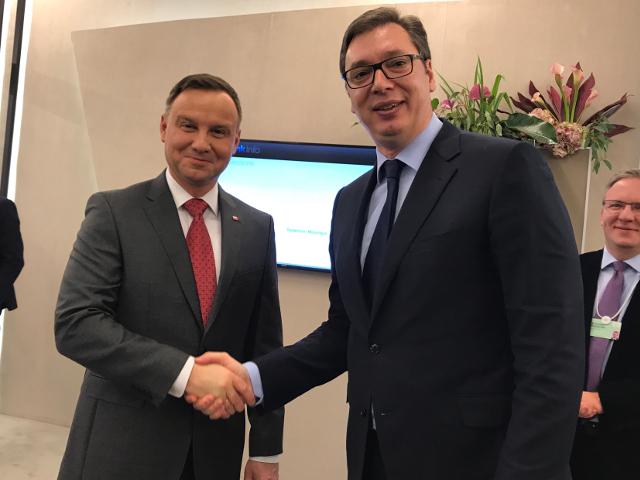 Vucic pointed out that trade is on the rise and that it is necessary to attract as many investors from Poland as possible, which would further improve relations of the two countries.
Dirk diggler
25 Jan 2018  #2
Ah thats awesome. I can only hope for more cooperation between poland and serbia. Finally we have a government that is restoring relationships with the v4 which suffered under po as they were too busy kissing eus ass.
Crow
25 Jan 2018  #3
If Poland decide to openly stand with Serbia, officially show sympathy, solidarity and understanding, that would be serious move for Poland. After that, Europe won`t be same. Never again Europe won`t be same after that.

And I just think that Geo-strategical situation allows exactly that to happen.
Dirk diggler
25 Jan 2018  #4
Polish MEP: EU is the sick man of europe

Vatican, Russia, USA, Japan and China are behind us already. What you think that are chances that Germany humiliate Poland now? Let me tell you. Non existent. Impossible.

Polish MEP: EU is the sick man of europe
Speaking about meeting with Polish Duda, Serbian president Vucic, said for TV:``You know, Poland is biggest Slavic country in EU. We looks to Poland.``

Door to EU should be kept open: Polish president
/Artykul/346036,Door-to-EU-should-be-kept-open-Polish-president

During a meeting with Serbian President Aleksandar Vučić, Duda said that Poland, which joined the EU in 2004, supported "the European Union aspirations" of that country.
Brat Duda je dobar.
Crow
21 Mar 2018  #6
Merged:

Should Poland prepare for armed resistance to EU and NATO ? - Patriotic thread for boosting moral !

Thread for patriotic materials. Time has come. Let us prepare my Polish sisters and brothers. Vermin coming again. Let us give THEM warm welcome and let us push them in hell where they belong I start with this >

TV rapport, announce that war begins and patriotic song emitted on Serbian TV when NATO and EU in coordination with Islamic league attacked Serbia, back in 1999 > when sky was dark from NATO planes and missiles filed with depleted uranium (eng sub) >

See a doctor,
Or a saint; a miracle is needed here.
Crow
21 Mar 2018  #8
Here is something for you, to see how it looks like when people organize itself for protection. That you see how it looks on the battlefield, in fire, in real action. To see what was behind attack on Yugoslavia and what is now behind attacks on Serbia, using NATO and EU as its tools > Trump​ appears to ignore requests for a handshake with Angela Merkel​
youtube.com/watch?v=uLfukuEutIU

Political opinion; Next time you vote Poles, be careful not to vote for Andrzej Duda

Sure, its just my opinion, which will I easily explain.

At a time when one by one European and world countries pledge to support sovereignty of Serbia, at a time when extreme Muslim Wahhabi narco-mafia terrorists threaten to secede part of Serbia`s territory, official Poland led by Andrzej Duda stubbornly stubbing Serbia in the back.

So, ask yourself, next time you vote, my Polish sisters and brothers. When did Racowie betrayed Poland in our long sharing history. Never, of course. Also, ask yourself whom prefer Andrzej Duda. Andrzej Duda prefer to respect interests and give support to Muslim Wahhabi narco-mafia terrorists. Don`t give your voice to such a man. Poland deserve better President. Much better.