Crow
8 Mar 2018  #1
Let us support US President who is under constant abnormal pressure of US mass media, on all kind of topics. Let magnates who controls media lift their pressure on Trump.

I support you mister president Trump! Keep strong on every attack against you from false media houses! Politicians are public persons but they are also humans and have right to dignified approach. Have right on truth after all and right to defend themselves.
Lyzko
8 Mar 2018  #2
Who pays you to write this drivel, Crow?
Crow
8 Mar 2018  #3
drivel? Not a drivel, lyz

Unfortunately, brat owner of this web site never offered any compensation. Its not alright but I am altruistic in nature and I write here for the love of Poland, Poles and ways of Sarmatism.
Joker
8 Mar 2018  #4
Who pays you to write this drivel, Crow?
He entitled to his opinion, Lysko.

Are you trying to silence with you left wing tactics now?

I support you mister president Trump!
Trump is doing a fantastic job despite everything the fake news and whiney liberals can throw at him!

If he pulls off a deal with NK to disarm their Nukes, he will go down in history as our greatest President!

Even fake news ABC/NBC gave Trump some praise on his dealings with NK.
Crow
8 Mar 2018  #7
My people and country greatly suffered from the injustice committed on us from false media houses that works for interests of certain financial circles and not for the sake of truthful information. I do understand how mister Trump fight great and important battle now. Battle for entire humankind and gets my greatest respect for that. I also respect his specific public tactics. Truth sometimes must be said half jokingly, in a world ruled by mass media in wrong and dangerous hands.

Great country such is US, finally again have great president. My great, great respect, mister Trump. Truly, my deepest respect, for bravery, for everything. And thank you, thank you so much for the hope.
johnny reb
8 Mar 2018  #8
Even fake news
The bias Left media has tried for 20 months now to produce any evidence that Trump was involved in any collusions with the Russians to throw the election in Trumps favor.

The special investigation and bias media have come up with NOTHING on Trump HOWEVER the investigation did come up with the crimes on Crooked Hillary for her special council to lie to the fisa court to obtain a fisa warrant to spy on Trump by leaving out critical information that the Clinton Crime Family Foundation paid a Russian spy $13 million for the fake dossier full of proven lies to give to the fisa court knowing if she would have told the courts that she had paid for the dossier that the fisa court would have never issued the warrant to spy on a campaign opponent which is a FELONY !

The drive by medias have all this breaking news to convict Crooked Hillary but they bury it and stop talking about Trumps collusion with the Russians and turn their attention on some hooker Stormy that Trump had a fling with 20 years ago. lol

Media freedom in the U.S. you say. lol
Or how about all the millions in kick backs the Clinton Foundation got in donations from Russia and speaking fees the Clintons got after the Uranium One deal went through after Crooked Hillary sold 20% of the United States Uranium (that Nukes out of) to the Russians !

All this HEADLINE NEWS that the Liberal Media sweeps under the rug and refuses to talk about.
Crow you just had to start such a thread to get me going didn't you.
LOCK HER UP !
Crow
8 Mar 2018  #9
Don`t thank me for this thread. Thank to Polishforums, to Polish spirit of free, to Sarmatism. I only underlined how things stand.
Lyzko
8 Mar 2018  #10
There's plenty of bias on both sides to go around.
johnny reb
8 Mar 2018  #11
No Lyzko, not true, the truth is that the media is the Left's Army.
Without the media the Democrat's would be done.
SigSauer
9 Mar 2018  #12
@Lyzko

Yea? 3 racist banners in a crowd of 100,000 people, and CNN reports it as the largest Neo-Nazi rally in Europe, when everyone, especially on this forum knows that not just to be an inaccuracy, but an act of willful deception.

Or, the skewed reporting on 'Syrian children,' while there is almost no mention of the children in Yemen, a comparable humanitarian disaster. Yea, ok.
Joker
9 Mar 2018  #13
My people and country greatly suffered from the injustice committed on us from false media houses that works for interests of certain
They are trying to apply the same methods upon us in the USA.
Many of Trumps accomplishments you wont see covered by the msm. His achievements are under reported or in many cases, not reported at all. The fake news media has become a political arm of the Democratic establishment and real journalism is dead. Together, they are trying their hardest to paint a picture of failure and disaster.
Lyzko
9 Mar 2018  #14
Sig, during WWI, RIGHT-WING propaganda, exclusively from England, of course, had the "Hun" bayoneting Belgian babies along with similar atrocities, later revealed to be conservative-fueled rubbish!!

So much for lefty liars, folks, fake news's been around a long, long time:-)
SigSauer
9 Mar 2018  #15
What is your point? They did it then so it's ok now? That's not really an argument of refutation of what's being done now which is an overwhelmingly hard left slant in the major networks.
TheOther
9 Mar 2018  #16
His achievements are under reported or in many cases, not reported at all.
What achievements? Getting laid by a p*o*r*n star while his wife was giving birth to his son? Grabbing pussy and bragging about it? Bankrupting his businesses? Scamming students out of tuition payments? Trump gave a huge tax cut to himself, his grifter family and his 1% buddies - that's it.
Wulkan
9 Mar 2018  #17
that's it.
that's it? I'm sure there was more fake news about Trump, you just didn't pay attention while watching your propaganda network aka CNN.
johnny reb
9 Mar 2018  #18
Trump accomplished more in his first year then obama did in his eight years and that is a FACT JACK !
President Trump is now meeting with N. Korea's Leader which no other President has ever done.
Time you climb aboard Othery and enjoy Making America Great Again instead of pouting about some hooker.
At least he didn't do it in the Oval Office with hand dipped 23 year old Monica cigars. Oh, I know, that was different right. lol
Lyzko
9 Mar 2018  #19
Depends on what you mean by "accomplished", Johnny. As of yet, nothing has changed in North Korea, and Kim's no fool and so is keenly aware of Western-style public relations by this time. Trump surely talks a good game, better than Obama any day, I'll admit that much. However, what has he conclusively done? He's polarized an already badly polarized nation and worse still, rich and poor were never as far apart as they are today, perhaps only during the Great Depression No. 1.

However, what has he conclusively done?
You read it as well. Its like you libturds want Trump to fail at all cost, even a nuclear war.

President Trump is now meeting with N. Korea's Leader which no other President has ever done.
The left is besides themselves because Trump is becoming more and more successful, something the Libs have never been able to achieve. Obama was the most polarizing President in our history. Its funny watching Lyzko and the Aussie grasping at straws trying to discredit Trump..lol
Lyzko
9 Mar 2018  #21
If Trump did stuff worth mentioning, I'd support him. So far, I've yet to be impressed. Hope springs eternalLOL

Then again, because of failed liberal policies, the country got desperate and voted this buzzard into office! Forty years of neglect and counting's gonna make even the sanest middle-class American go off their nut and shoot themselves royally in the foot!

The backlash aka bullet that Germany dodged by re-electing Merkel instead of PEGIDA or AfD, hit the US instead in the form of the Man in the Red Tie.
johnny reb
9 Mar 2018  #22
The left is besides themselves
Do you hear the "GRINDING" noise ?
The "RIPPING" sounds.....?
The "GNAWING" ?... of Dumbo - crats...(chewing the 'insides' of their mouths) ?????
That "IMBECILE" .... that DAMNED Out Sider has done it AGAIN !
He's got the North Korean 'Dick - tator' coming to the "TABLE" to talk !"
Something THAT bill CLINTON COULDN'T DO or Ole Barry FAILED AS WELL (only after they BOTH Sent "pallets of Cash "to that little Pot bellied bozo ! )

AND IT DIDN'T WORK FOR THEM.
But now the Trumpster is "getting IT Done !"
I love it Love it Love it.......
And at the same time.... they are being exposed for the "FRAUDS" they are by NOT protecting their 'Citizens' against Illegal Immigrants that are FELONS... and turning Californication into a Sanctuary state !

And stopping ICE from doing their Jobs under FEDERAL LAW !
NOW they are readily admitting that the FUTURE of the Democratic Party are the IMMIGRANTS ! Whoa....
The Trumpster is FORGING AHEAD... working for the MIDDLE CLASS...(that was ONCE the Focus of the Dems/ Socialists) & who have seemingly "RETIRED from the field" relinquishing their Once un assailable strangle hold over them ! OUCH !

If Trump did stuff worth mentioning, I'd support him.
Are you saying you dont support what he has done for the veterans and how he stopped our military from being gutted by the democrats to pay for Illegals and Californian food stamp deadbeats?

By winning the elections, Tump literally saved the world
Crow, I could only imagine how bad and worse off the whole world would be right now if Crooked Hillary would have won.

NK would be blowing off missiles like fireworks and of course the military would be out of money because they spent it all on safe zones for snowflakes...lol
TheOther
9 Mar 2018  #25
Read this, expat
Hey! I was already a citizen before your parents came to the US and overstayed their tourist visa. :)

fake news
You forgot to wear your Chinese made MAGA hat and scream Hillary and Obama. LOL!
SigSauer
10 Mar 2018  #26
Why did you bother? You've never said one good thing about America. If I'm looking to emigrate to a country, I certainly wouldn't pick one which I despise.
Crow
10 Mar 2018  #27
Crooked Hillary
That witch is seriously shaken. Literally.
johnny reb
10 Mar 2018  #28
She has her head up so far up in the vodka bottle she couldn't hear the telephone ring.
When she made the remark to Trump that she may run again in 2020 Trump 45 just smiled and quietly said, (I hope you do.)
Have you seen her lately, she is a basket case.
On the other hand, when the tuff gets going, Teflon Trump goes it alone.
O WELL
10 Mar 2018  #29
And now they Beeching* about him for accepting the offer from comrade UN.Atleast he knows how to negotiate the nut.
Crow
10 Mar 2018  #30
Oh God 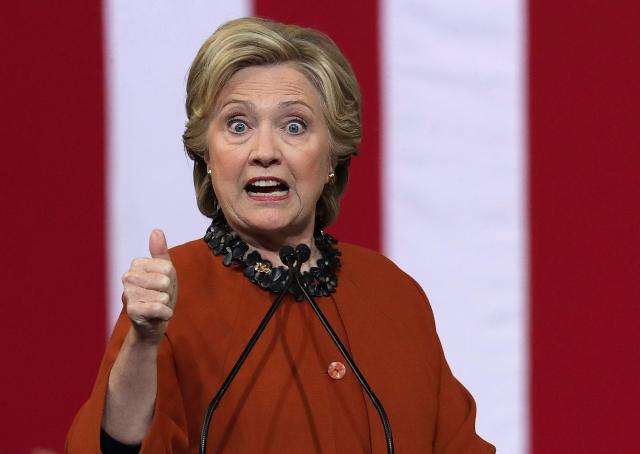