Rich Mazur
31 Aug 2018  #871
Now for the third time, you tell Rich how you would cure the trade deficit.
...without sending the nation to a 12-step program, which may or may not work.
How about sending a small delegation to Germany, instead, to find out how they manage to have 200 billion trade surplus.
TheOther
31 Aug 2018  #872
What ? Paying back debt is not important ?
You wouldn't recognize sarcasm when it hit you in the face, dude. When was the last time that the USA had no debt? At the moment we are not paying down what we owe, we only pay interest. Why do we have debt? Because we spend more than we earn. That's fourth grade. Too academic for you Trumpskis, I guess.

You also refuse to look at other modern societies like Japan and Germany that enjoy huge trade surpluses.
Don't deflect just because you refuse to acknowledge the point I'm making. Look up what a trade deficit is and then tell me why the US has one. We buy more from others than they buy from us. Simple as that. Why don't they buy more from us? Answer that for yourself. Just imagine: the tiny nation of Germany was the global export champion just a few years ago. Their secret? Germans manufacture stuff that other nations want and their factories are to a large extent still in the country. Mostly smaller to medium size companies which are not driven and controlled by the ridiculous shareholder value sh*it that ruins us here at home.

Now for the third time, you tell Rich how you would cure the trade deficit.
If you haven't managed to understand it by now, then I won't waste my time with you any longer.
Rich Mazur
31 Aug 2018  #873
We buy more from others than they buy from us.
Because the US government let the manufacturing leave. Why did they? Because the American politicians are unpatriotic who**s. After they leave as senators and congressmen, they become lobbyists for the foreigners. Why is this whor*** possible? Because they passed the laws that make it so, and because to be elected they needed bribes we call political contributions from the outfits they would join later. The US system is so off-the-chart corrupt that it is beyond repairable. Only a military takeover or a popular revolution can fix this f***** mess. Trump is our best chance to do peacefully. And that is why the swamp I just mentioned hates him more that I hate priests who rape kids.

That's why we have trade deficits. Now, respectfully, I am really done.
cms neuf
31 Aug 2018  #874
They did not allow manufacturing to leave. What they did was allow business people to do what they want - the US is a free country and people have the freedom to make money more mess how they want, unless it is selling heroin.

I know that is alien to Russians but that is the way US society works and one of the reasons the US is far richer than Russia.

If you claim to have grown up in 1960s Poland maybe you remember the awfuk quality that results from forcing people to buy inferior home produced goods. Implausibly you say you forgot the Polish language but have you really forgotten Polish commie chocolate or coffee or gutrot whisky ?
johnny reb
31 Aug 2018  #875
There more you consume, the better. Paying back your debt? Not so important. That's a job for our children and grandchildren.
You want to pretend that you were being sarcastic ? Boy you sure fooled me. NOT !
That is straight up Socialist Liberal Progressive mentality or Obamanomics.

If you haven't managed to understand it by now, then I won't waste my time with you any longer.
Undrstand what, you have refused to answer the simple question of how you would cure the trade deficit.
You Democrats cry that Trump is going about it all wrong but can't seem to produce a better idea then what Trump is doing. lol

Hell you didn't even give it three days to work (when it is going to take years) when you started howling.
So I ask you the forth time, what is YOUR solution to solving the trade deficit Big Shot ?
Best you just say, "I don't know Reb, I was just repeating what I heard on CNN."
You Democrats had another meltdown over Reagonomics just like you are trying to do with Trump with you motto, I HATE TRUMP no matter what !

The total national debt in 1980, when Reagan took office after winning a campaign based largely on reducing the deficit and the debt, was at a 40 year low, in both real dollars and as a percentage of GDP.

And yet you will sit there with a straight face and tell me how awful Reagonomics was and what a horrible president he was. lol

No Mr. Lost for Words, YOU are the one that doesn't understand that America has been used, abused and tattooed by the rest of the world concerning the trade deficits for way to long now and we FINALLY have a president that says ENOUGH !

But YOU are inflicted with your "Trump Derangement Syndrome" it is no wonder you can't answer Rich's question.

That's why we have trade deficits. Now, respectfully, I am really done.
I concur Rich, he just comes here to argue and pick fights.
Rich Mazur
31 Aug 2018  #876
They did not allow manufacturing to leave.
They did by not saying this:

Please, go but just be aware of this beautiful 100% tariff awaiting your Chinese-made products at the port of entry. 100% not enough? How about 200%? Why would we do it? Because if you close that plant of yours in Peoria, we have to pay the unemployment benefits to the people that will be laid off. That's why. Now, you are free to do whatever you want.

That's what I meant by 'allow'. Now, take your history lectures about communist Poland and your personal comments about me and shove them where it's dark.

I think Pence could be quite a good president
Rich Mazur
31 Aug 2018  #882
The hardest thing when debating the Trump haters is extracting - I am using this word deliberately - out of them what they propose as an alternative. The best you can get out of these morons are nasty adjectives about the man or those who like him.

Which is not bad if you want to feel like you are back to grade 5.

About my Post 878: F*** off my family. Got it, a-holes?
TheOther
31 Aug 2018  #883
Because the US government let the manufacturing leave.
Come on, Rich - free market, less government. That's what the Republicans have been preaching as long as I can remember. Anything else was (and still is) labeled "Socialism" or "Communism". You can't have your cake and eat it.
cms neuf
31 Aug 2018  #884
An alternative?

A woman on a United flight from Orange County, Calif. to Chicago claims the man seated next to her masturbated for "hours".
in another a few hours earlier. 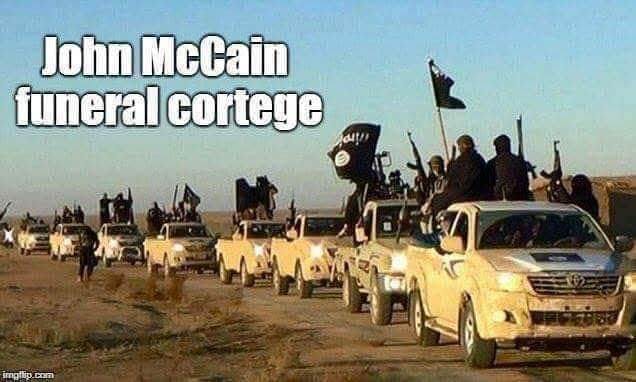