pawian
12 Jul 2020  #1,771
You lost. That all that there is!.
Don`t be such an ignorant moron. Do you remember the Polish anthem? Its first line? If not, google it now. So, Serbs can sing it too, replacing the word Poland with Serbia. Did you know that the melody of the Polish anthem was used in Slavic patriotic song, Hey, Slavs. It was later adopted as the anthem of Yugoslavia after WW2.

No you didn`t know it , coz you are a stinking ignoramus.

Check it out , then:
en.wikipedia.org/wiki/Hey,_Slavs

youtu.be/ZERpJ4G1S-k
Crow
12 Jul 2020  #1,772
And let me remind you. Serbian Gavrilo moved things well for Poland, not the Vatican, not the Patriarch of Constantinople. And Serbs had Svetovid on their lips when they moved.

Wake from delusion Irone. We Serbs love Poland. The Vatican hates Poland and considers Poles as infidels.
Ironside
12 Jul 2020  #1,773
Don`t be such
You are a real life troll. Supporting delusion of another troll. Why don't make love to each other under the bridge. phew

We Serbs l
Hey because I'm your friend so I'm telling you what what. IF I wouldn't give a F about Serbia I would support our delusional crap the way pawian does.

The ``aid``.
Dirk diggler
12 Jul 2020  #1,775
I'm sorry Crow you know I love you but right now Serbia has a dyke German puppet for prime minister, get back to me once you put someone like Mladic and Karadzic back in charge. Idk how the hell her and Vucic came together to rule the country....

Although that is true, international votes could swing this. US is for Duda and UK for Trzaskowski.
Crow
12 Jul 2020  #1,776
Oh ya early exit polls show Duda leading = )
But of course. Racowie supports him.

, get back to me once you put someone like Mladic and Karadzic back in charge.
You can`t have Mladic without a good economy. We now consolidate the economy.
Crow
13 Jul 2020  #1,777
Germans celebrate with Croat Nazi songs

Germany don`t need to complaint when lose any influence on Balkans, in Central and in entire Eastern Europe. Forget Russia and China. Forget Earth. Excavate resources on Mars.

As for Adriatic, forget Dalmatia. Serbs coming back and closing that door to you. Your plan failed. Go to Pope and cry.

You will not score many point yapping BS about Vatica
There won`t be any forbidden topic between Poles and Serbs, Poland and Serbia. We need each others to survive.
Vesko Vukovic
14 Jul 2020  #1,778
On this day 12 months ago

On July 14, 2019, Novak Djokovic, the best tennis player in the world, once again reminded us that he is one of the greatest athletes of all time.

Exactly one year ago, the Serbian tennis player won the 5th title at Wimbledon, and in the grand final he defeated an even bigger opponent, Roger Federer.

In one of the biggest matches in history, Novak managed to celebrate in 3 tie-breaks, the last of which was a super tie-break because it was played in the 5th set with the result of 12:12. 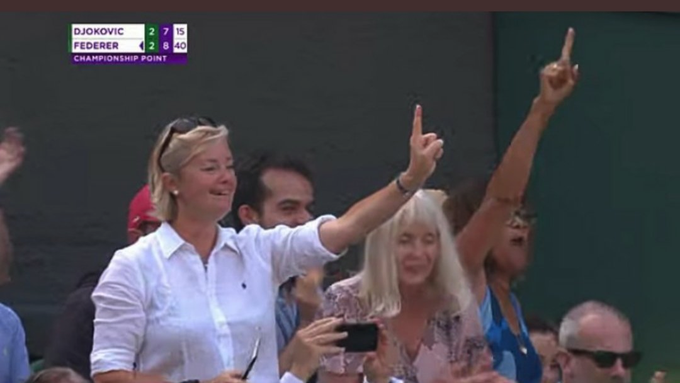 Probably one of the most legendary pictures was created at this match, when the lady from the stands fell into the frame, pointing her index finger, which alluded to the fact that Federer was missing another point in order to reach the trophy.

This moment happened in the 16th game of the 5th set when Federer has a serve and two match points. Djokovic managed to save both and then make a rebreak. 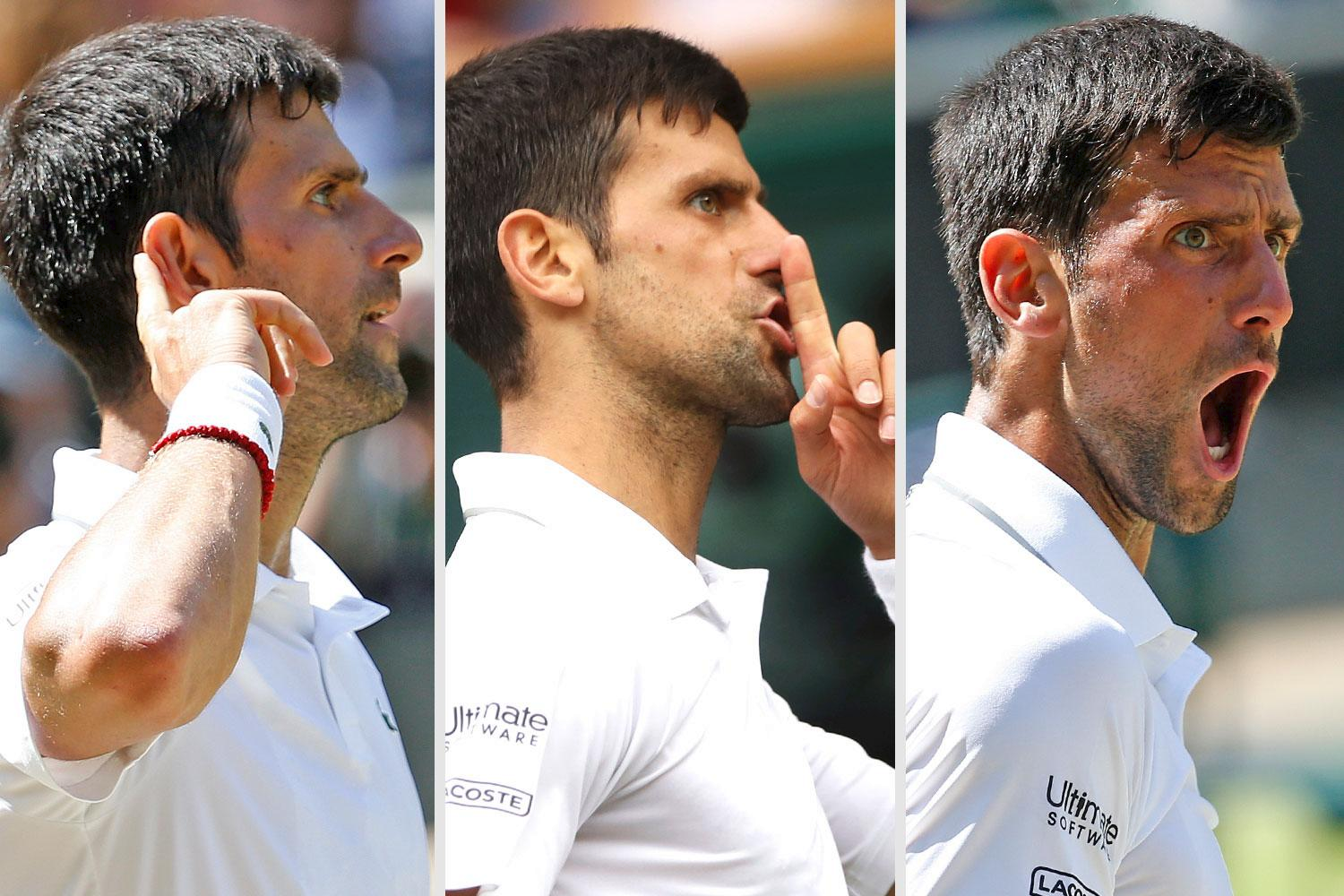 As in the previous 2 tie-breaks in the match, Novak managed to be mentally stronger and that in the end brought him the 5th trophy on the grounds of the All England Club. 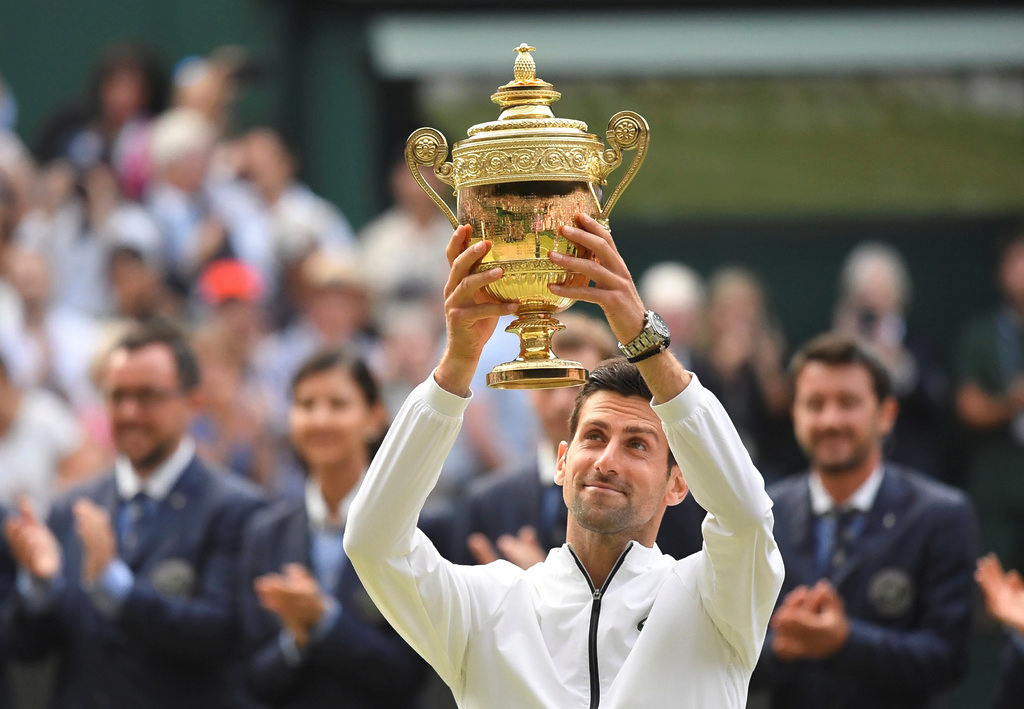 NOVAK DJOKOVIC - Ambassador Of A Nation
Crow
18 Jul 2020  #1,779
the lady from the stands fell into the frame, pointing her index finger
I think that she was very disappointed that her chosen male wasn't victorious. It was in contradiction with all her delusions, not just in tennis or in sport.
Crow
20 Jul 2020  #1,780
It does now. And has done on and off for a long time.
My dear, if you refer to international order, there is no international order. Not any more. In Europe, that order was destroyed when Germany and Vatican (while NATO and EU followed them) destroyed Yugoslavia and plotted partition of Serbia and to continue genocide on Serbs, which was started during WWI and WWII.

So what?
You would soon learn that being Slavic represent much more important thing then being western European.
jon357
20 Jul 2020  #1,781
there is no international order. Not any more. In Europ
Yes there is.

It does
It had chance before Maiden but after Maiden its ugly joke. Say thanks to Germany.
Crow
21 Jul 2020  #1,785
Serbia giving a great boost to the French economy stricken by Corona pandemia >>> 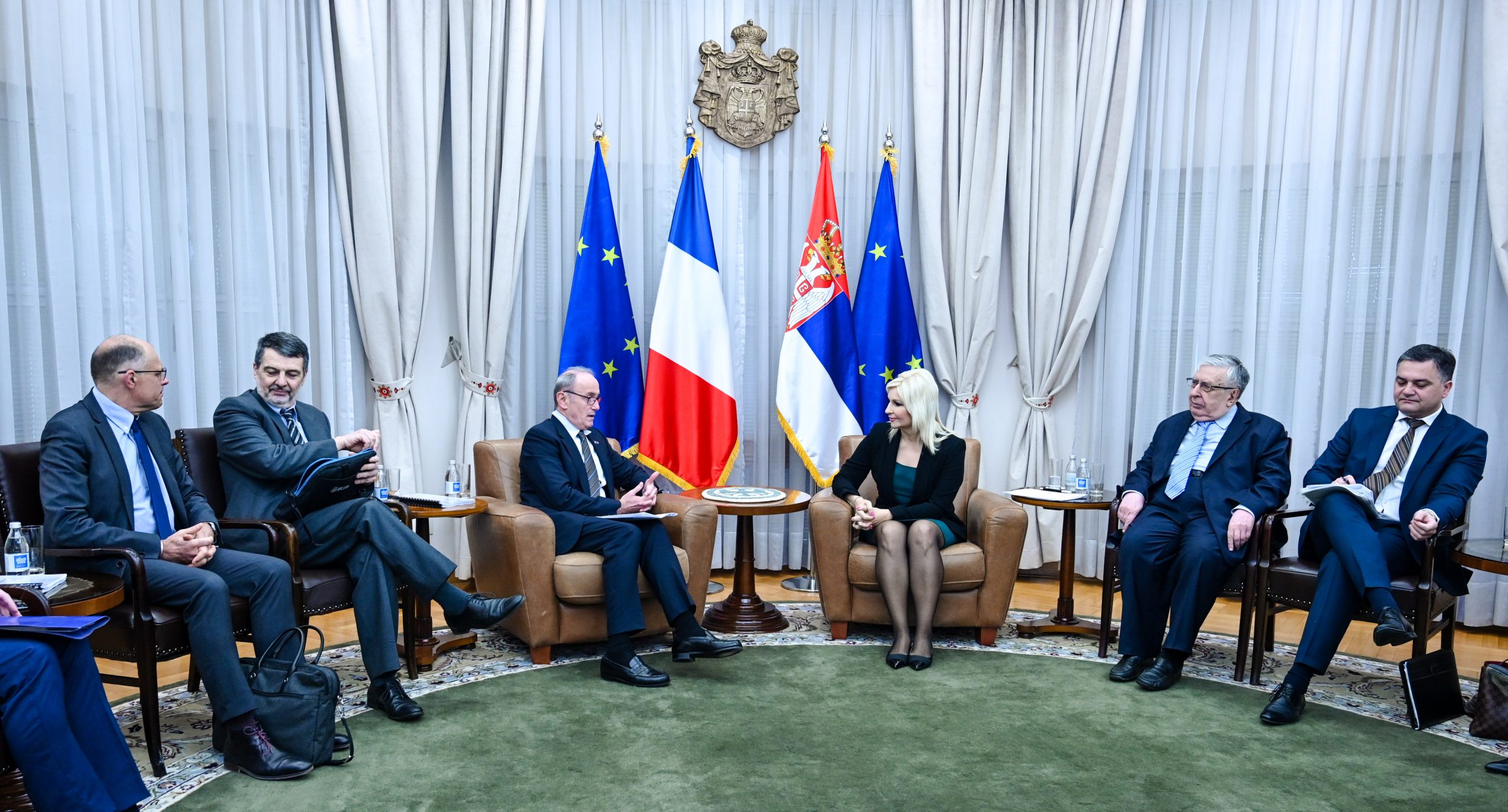 Ambassador Jean-Louis Falconi was, in turn, quoted as saying that the Belgrade subway is "at the center of economic relations between Serbia and France
Poloniusz
22 Jul 2020  #1,786
The only mass scale killings were commited by Serbs.
Lies.

Link to the article: zerohedge.com/political/bill-clintons-serbian-war-atrocities-exposed-new-indictment

And what a shame that three US presidencies had to pass before any action was taken.
Dirk diggler
23 Jul 2020  #1,787
That's how China is conquering the world - cheap credit, financial backing, corporate and military espionage, reverse engineering.... I love the Chinese because of how smart they are. I just wish they weren't so ****** filthy and would wash their ass once in a while and stop eating bugs and bats and ****. You go to Northwestern University which is arguably the best and most well known school in the midwest and seriously at least 1/4 of the student body is from China. They all have nice new BMWs, Audis, Land Rovers, etc. they drive to school and none of them work. A few even have Ferraris, Lambos, etc. but they never drive them to school so as not to make other student jealous.

Some of them don't even care if it's a viable investment like the roads and bridges they're sponsoring in Montenegro - but it doesn't matter. In a way, it's even better if they can't pay it back because then a sovereign country is beholden to them.
Tacitus
23 Jul 2020  #1,788
Lies.
On the contrary. He is accused of many crimes, but not of mass killings on the scale of Srebenica (and how could he since those were not commited against Serbs).

so ****** filthy
Honestly, at this point American's have really no reason to feel smug towards the Chinese and their hygiene, since the Chinese at least understand that wearing masks is an effective measure, while the Americans (and their idiot in chief) couldn't even bring themselves to waer them when it was still possible to control the pandemic.
Poloniusz
23 Jul 2020  #1,789
He is accused...but not of mass killings on the scale of...
You can try to split hairs all you want but you do so in vain.

Your rationalizations, misdirections, and deflections are pathetic and puts you personally and firmly in the same league with the thug Thaci who is now an indicted mass murderer, torturer, kidnapper and war criminal.

I am not the one who falesly claims that Thaci is accused of crimes similar to Srebenica, so your insults fall entirely back on you.
Poloniusz
23 Jul 2020  #1,791
I'm sure the thug Thaci would be amused that he has people like you who actually try to defend his non-existent good reputation. You can be his pen pal when he is sent away to serve a very long prison sentence.
Tacitus
23 Jul 2020  #1,792
I am not defending anything, if he is guilty he should stand trial, like e.g. croatian war criminals and receive due punishments.

You are the one who is insulting the victims of Srebenica.

You and you alone are the one who brought up Srebrenica and the scale of killings.

As stated this is all rationalization, misdirection, and deflection on your part.

You are not only desperately trying to do damage control for the thug Thaci but in doing so you are also making a complete mockery of Thaci's victims and their families and everyone who suffered and died during the Balkan War as a result of KLA agitation, terrorism and leftist cheerleading for them throughout Western Europe and North America at the time as well as with you right now.
delphiandomine
23 Jul 2020  #1,794
How nice to see you again, Biegsy.
Tacitus
23 Jul 2020  #1,795
I am just stating irrefutable facts here. Serbs were not the victims of mass killings on the scale of Srebenica, nor is Thraci accused of them. Both are very easily verifiable. And your lies are easily refutable.

only desperately
You are the one who is grasping for straws here. Nothing of what you said holds substance compared to the horros of Srebenica.

rationalization, misdirection, and deflection on your part.
Add blatant lies and you just summed up your entire strategy.
Poloniusz
23 Jul 2020  #1,796
Has Thaci been indicted for mass murder? Yes or No.

Did you state that only Serbs committed mass killings? Yes or No.

Simple, one word replies to each question.

And don't digress either.
Tacitus
23 Jul 2020  #1,797
He has not been indicted for mass murder on the scale of Srebenica, nor can he because the Serbs were never victims of a comparable massacre.

Srebenica is a singular event during the Balkan wars.

That is objective truth.

It is also backed up by the prosecution.

He is under suspiscion for around 100 deaths according to the prosecution.

"Mr Thaci and others "are criminally responsible for nearly 100 murders",

100 murders, compared to 8000 in Srebenica, and that leaves out the other mass killings against Bosniak muslims.

So stop your pathetic deflections.
delphiandomine
23 Jul 2020  #1,798
This is the old tactic of Serb sympathisers. After Srebrenica, they attempted to compare the killings of a few Serb farmers by desperate Bosniaks in Srebrebica to the genocide that took place there.
Poloniusz
23 Jul 2020  #1,799
That is objective truth.
You were asked to answer only two simple questions with either yes or no.

You didn't do that and instead provided a ranting dissertation chock-full of rationalizations, misdirections, and deflections on behalf of your thug hero Thaci.

No one should expect any direct, honest, and unbiased answers from you.

100 murders, compared to 8000 and that leaves out the other mass killings
So to use your logic, 6 million Holocaust deaths don't matter because up to 85 million died during WWII. Got it.

It's fair to say your credibility is complete shot now but that assumes you had any to begin with.
Tacitus
23 Jul 2020  #1,800
nswer only two questions
If your question had been: Was Thraci indicted for killing 100 people, which is nowhere near the scale of Srebenica, I would have answered yes. But I am not going to fall for such obvious false equivalencies.

Or like saying: The Germans killed Poles when they invaded Poland, but the Poles later expelled and killed Germans, so both sides are morally equivalent.

There will always be attacks against innocents in war, even the murder of several people. The difference is, that the Serbs were like the Germans methodically in their killings in Srebenica.

your credibility
I am not the person who is lying and deliberately distorting the truth the false equivalences. I only state historical facts. Srenebica dwarves anything that was supposedly done to Serbs. Unless you can bring up a similar crime, you will forfeit this arguments.

You are the one arguing in bad faith. You were even too cowardly to provide the actual numbers of Thraci's supposed crimes, since you know that it would make your claims that those are comparable to Srebenica look ridiculous.