Black and Latino unemployment levels have been at record lows since Trump got the economy booming.

They totally ignore Obamas massive failures and this issue has been going on for decades.

I really cant wait for the next election and the subsequent liberal meltdown:)

This could be the end of the Democratic party as they turn into extreme socialists. Too bad none of these clowns have never read a history book and they're oblivious regarding Venezuela as well, this right in their faces, but the msm buries everything and only focuses on bogus witch hunts and Trump conspiracy theories.

Dumbocrats, a waste of good air!
TheOther
8 Apr 2019  #98
Black and Latino unemployment levels have been at record lows since Trump got the economy booming.
Get your facts straight. The unemployment rate amongst blacks and Latinos has been on a steady decline since 2009. Trump has nothing to do with it. He's just claiming it's his success, and the goobers believe it: 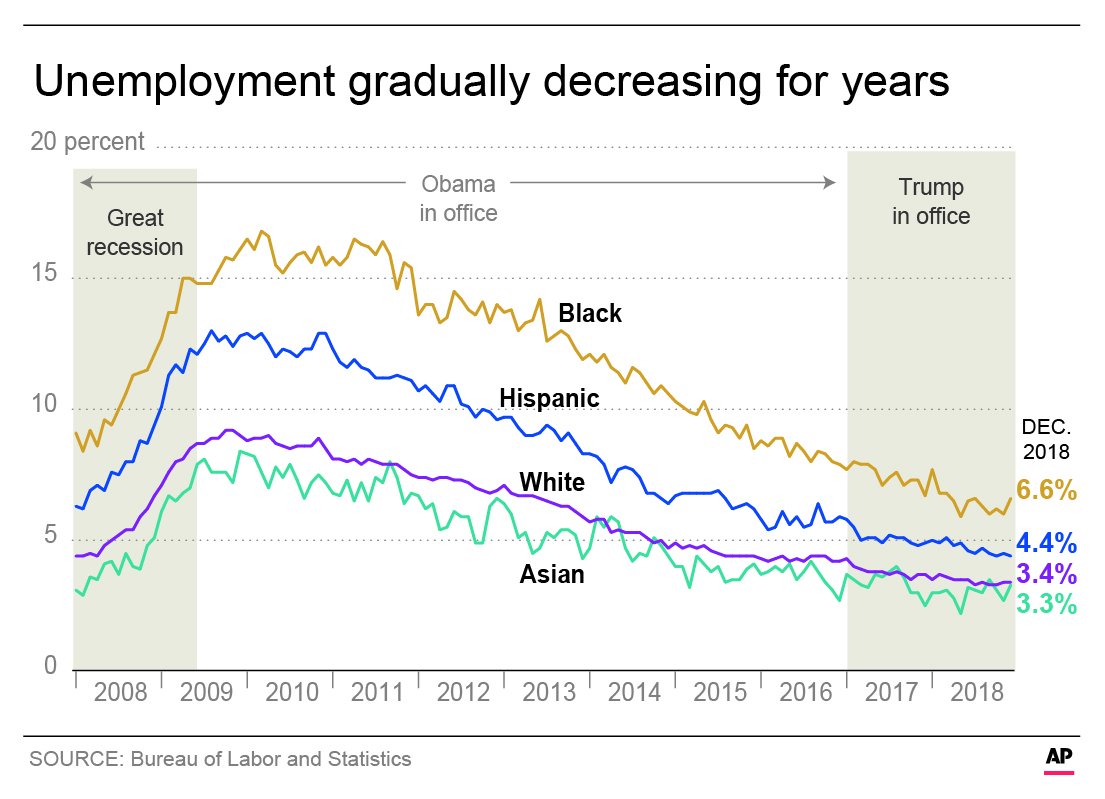 apnews.com/e1afa3f19a054540a7c34ca193bdd9ae
Vlad1234
8 Apr 2019  #99
Fortunately nowdays Russia and US have no any objective reasons to start nuclear war. Or any global war. Is there any? Neither will Russia dare to attack any NATO member.
Rich Mazur
8 Apr 2019  #100
The unemployment rate amongst blacks and Latinos has been on a steady decline since 2009.
It's neither Obama nor Trump. Economy of the US size has its own massive inertia and cycles.

What that graph does not show is debt. From the national, to trade, corporate, consumer, student loans, credit card, and mortgage.

The US prosperity is a balloon filled with funny gas - borrowed money. Subtract that and the average American would show negative net asset value going into thousands.

In that sense, nothing has changed. It's actually getting worse as consumers, who are as stupid consuming as they are voting, are more "optimistic" and "confident".

But, when Trump wants to stop the predators like China and the EU and the swamp that loves making things there to sell them to the underemployed Americans, and talks tariffs, the swamp and the Euros go apeshit screaming "trade war!!!". Like we have not been in it for decades as the world-class losers.
Ziemowit
8 Apr 2019  #101
the question of Putin interchanging the top post in Russia with Medvedev?
@ comrade Mod

The above post of mine matches the subject of the thread "Why is Poland weaker than Russia" perfectly. It may suggest that this Putin/Medvedev interchange may actually make Russia weaker or stronger (depends on the person's point of view) vs. Poland. But if mods decide to move it from there to Random, so be it, I decide not to take part in the discussions of that thread any longer.
Rich Mazur
8 Apr 2019  #102
Unfortunately, the US is on the military spending binge because that is what stupid addicts do to get another fix. All those multi-billion-dollar toys, like the aircraft carriers, are a prime example how that addiction works. In a conflict with Russia, those medieval machines would be gone in 15 minutes. OK. thirty.

global war and majority of US cities destruction?
Mutually assured destruction means precisely that...
Vlad1234
8 Apr 2019  #109
Thre are some rather good reasons why countries don't "just print money"...
To a certain extent many of them do. Would not you be able to purchase at least 100 times many things 100 years ago for a 1 USD?
Velund
8 Apr 2019  #110
Attempt to "print" more than yearly GDP will start process that by itself will have catastrophic consequences - with hyperinflation and skyrocketing rise of interest rate on foreign loans. People will be definitely not happy after loss of their pension savings and government will be blamed for this.

And we now hear discussions about over-population on Earth...

So, if masonic masters will choose between 100% chance of losing control over few greatest countries of the world and 10% chance to gain total control over planet after global war with 20% of population remaining and lots of territories that will remain unhabitable for few centuries... I do not know what they will choose. And humanity or common sense will not participate in that decision.
jon357
8 Apr 2019  #111
masonic masters
Who?
jon357
8 Apr 2019  #112
More firings by trump today. Looks like the Tangerine Turd is purging all those around him.
Vlad1234
8 Apr 2019  #113
Attempt to "print" more than yearly GDP will start process that by itself will have catastrophic consequences
Many if not majority of currencies experience inflation at least 2% annually. It means they loose 40% of their purchasing value in 10 years. But many people around the World prefer purchase USD or other currencies and store their savings in it because their own national currencies are even less stable and inflation is even higher. But it looks like US debt stabilized in the last 10 years. Officially it doesn't grow comparatively to GDP too fast. For a few years it stays at 105% to GDP ratio, what is not that catastrophic. For comparison Japan's national debt exceeded 300% of their GDP for a while, yet no catastrophe has happened to them.
Velund
8 Apr 2019  #114
Who?
Looks like you are not believing in all those conspiracy theories... ;) And never looked (in detail) at USD bills of various denominations. ;)

For comparison Japan's national debt exceeded 300% of their GDP for a while
IIRC it was mostly internal debt (japanese population and businesses), denominated in yen.
jon357
8 Apr 2019  #115
And never looked (in detail) at USD bills of various denominations. ;)
There's nothing Masonic about them. The pyramid is not nore has ever been a Masonic symbol. The Eye of Providence (which it slightly resembles) is not exclusive to Freemasonry and its use on US currency predates its use as a decoration in Lodges. The dollar bill thing has been comprehensively debunked.

You still didn't say who your 'masonic masters' are. Very worth expanding on that. Y'know, having mentioned it...

Not much to do with PL or their nosy neighbour either, except that Poland has long had a rich history of Freemasonry, and Russia certainly had until around 1820.

It looks like quite a lot will come out in this guy's trial:

"Falenta's many business interests included importing coal from Russia. Polish media have reported that he owed millions of dollars to a company with ties to Russian President Vladimir Putin, leading some to suspect a Russian role in the affair that brought down the pro-EU Polish government."

washingtonpost.com/world/europe/polish-fugitive-in-spanish-prison-awaiting-extradition/2019/04/08/722ac700-59e8-11e9-98d4-844088d135f2_story.html?noredirect=on&utm_term=.85cdc52f368e
Velund
8 Apr 2019  #116
Very worth expanding on that. Y'know, having mentioned it...
You can look for degree that had US president that commanded to nuke Hiroshima and Nagasaki. A lot of people believe that final decision was made not at government or political level.
Vlad1234
8 Apr 2019  #117
IIRC it was mostly internal debt (japanese population and businesses), denominated in yen.
France external debt exceeded 200%, combined with public debt more than 300% of GDP. Yet they didn't collapse.
The same is Belgium, Netherlands, Portugal.
usdebtclock.org/world-debt-clock.html

So, I think it could be too prematurely to worry, let wait.
jon357
8 Apr 2019  #118
You can look for degree that had US president
That doesn't in any way mean that the two things are remotely connected.

A lot of people believe that
Makes all the difference, eh...
Rich Mazur
8 Apr 2019  #119
The only true measure of the criminal government irresponsibility is the ratio of the interest payment to the tax receipts paid by the individual taxpayers - the true government income. All the rest is smoke and mirrors. At some point soon, all of the US individual income tax will be just enough to pay the interest on the national debt. There will be no money for anything else.

...and tell me that everything is just fine.
Velund
8 Apr 2019  #120
Makes all the difference, eh...
For modern US and UK politicians and media - almost no difference. "A lot of people believe" that Russian agents "highly likely" poisoned Skripals - but nobody seen any proofs that can hold water. Still a lots of diplomats expelled and a lot of other pretty nasty things causing billions in direct and inderect losses was made to russians.

A lot of people believe that final decision for using nuclear weapons on japanese cities was made at masonic council. There is no proofs as well... But see above. ;)