After Brexit, Northern Ireland may obtain a special status in the EU

jon357
2 Jan 2019  #421
I personally know people who have happily lost hundreds of thousands of pounds
Same here. The smart money is going elsewhere.
Chemikiem
2 Jan 2019  #422
The electorate was fed false information and down right lies about Europe,
Have to agree with every word of your post. People voted believing all the bullsh1t, especially

that Brexit would stop migrants entering Britain,
They very deliberately kept quiet about the fact that there were more migrants coming in from Commonweath and other countries outside the EU than from within it. The whole thing is a disaster and it's only going to get worse.
Dirk diggler
2 Jan 2019  #423
Speaking of Ni, I read Poland opened a new consulate in Belfast recently
TheOther
3 Jan 2019  #424
The electorate was fed false information and down right lies
Yes, and nobody talks about the fact that the referendum was NON-binding either.
Dirk diggler
3 Jan 2019  #425
Everyone knows that when a referendum is supposed to be non binding including the recent climate change agreements are in fact binding. The non binding adjective is merely added to confuse citizens/voters
TheOther
3 Jan 2019  #426
Non-binding means non-binding. All the politicians had to do was, to point out this fact. Instead, they hid behind the "will of the people" and went ahead with the nonsense called Brexit.
jon357
3 Jan 2019  #427
Yes, and nobody talks about the fact that the referendum was NON-binding either
Basically they messed up on the terms of the referendum; they aren't a large part of UK political life and politicians (especially in 'leave' areas) were afraid of deselection etc.
johnny reb
3 Jan 2019  #428
The smart money is going elsewhere.
It sure is.
Have you noticed how the Japanese YEN has shot up.
We are all in for some very hard times as the greatest recession looms.
The world debt is now past the point of any realistic return.

Should Irish Catholics also have been deported for the actions of a few?
johnny reb
3 Jan 2019  #431
No because not like the Muzzi's, they chose to work and acclimate.

Unlike the Ira, Muslims purposely target innocent civilians.
Northern Irish paramilitaries targeted civilians and still continue to do so through punishment beatings. For instance, these - [n.wikipedia.org/wiki/Dublin_and_Monaghan_bombings - 33 people killed on the same day. Or you could talk about Omagh - en.wikipedia.org/wiki/Omagh_bombing - 29 killed. Sure, Islamists have been responsible for more deaths during a single day, but imagine living for 30 years in Northern Ireland and knowing that you could be the victim of terrorists at any minute. Many innocent people were killed, including quite a few as a result of mistaken identity.

When you add The Troubles to the ETA campaign and the actions of the RAF and others in Germany, significantly more have been killed at the hands of white Europeans than Muslims.

Atch will confirm it for you, but Irish men for many years in Britain were regarded with significant suspicion and were regarded as potential terrorists.
mafketis
3 Jan 2019  #435
significantly more than were killed at the hands of Islamic terrorists.
In the UK... when you add in other countries....
Dirk diggler
4 Jan 2019  #436
but imagine living for 30 years in Northern Ireland and knowing that you could be the victim of terrorists at any minute
I don't need to imagine it - I live in Chiraq. A good, quiet year means only 500-600 murders/3000 shootings. There's been times I'll be smoking a cig, listening to music just zoning out and suddenly a big black arm comes out of the car in front and starts shooting at someone driving or walking on the sidewalk. One time I caught a slug in my trunk. If dude aimed just a tad higher it would've gone into my head. Dudes out here aren't playing around. They don't even care if its broad daylight with a ton of people outside since witnesses rarely ever come forward even people who get shot don't talk and so less than 25% of murders are solved with even less resulting in a long conviction. If a convicted violent felon is caught with a gun they'll do at most a year or two in jail, sometimes just a few months.

Over 3600 people were killed throughout The Troubles, significantly more than were killed at the hands of Islamic terrorists.
3k died in just one Islamic terror attack in the US, in Belsan over 300, Bataclan over 100 and the larger attacks in England and France were dozens like the subway and bus bombings.

significantly more have been killed at the hands of white Europeans than Muslims.
I'm not talking about decades back though I'm talking about the past few years namely since 2015 when the migrant crisis began and the number of Muslims in the EU exploded. If we're going to go into history I'll cite Dr. Bill Warner, who has over 15 published works about Islam including Amazon.com best sellers and runs a think-tank studying political Islam, Muslims are responsible for 270 million 'non-believer' deaths over the past 1,400 years - most of which were during the few centuries succeeding Muhammed's reign during the Islamic conquests of North Africa, Middle East, Asia and into Europe. Nearly half the Hindu population - roughly 80 million - killed, Christians in North Africa and Middle East nearly wiped out with only tiny communities left today, Zoroastrians nearly went extinct, 10 million Buddhists killed....

In just 2018 alone, globally there were 11,700 deaths as a result of Islamic terror across 56 countries in 1,973 attacks. Now the ETA, IRA, and any other white terrorist group couldn't come up with those numbers combined in every country they operated in throughout decades. And this is just one year we're looking at which wasn't even the most deadly. 2016 and 2015 were far worse both with over 20k people dying that year around the world as a result of Islamic terror.

If we look at Europe alone since 2001 (list I found is linked below), the numbers get into the several thousand - which considering the relatively small % overall of Muslims to the total European population definitely shows that they disproportionately killed more people. If we compare IRA, ETA, and other 'white terrorists' in Europe for the same time period, since 2001, their totals combined come out to perhaps a few hundred, but no where near thousand.

Here is a full list of Islamic terror in Europe since 2001:thereligionofpeace.com/attacks/europe-attacks.aspx
Atch
4 Jan 2019  #437
Irish men for many years in Britain were regarded with significant suspicion and were regarded as potential terrorists.
That's true.

I don't need to imagine it - I live in Chiraq.
It's not quite the same. And it's not just about numbers killed.
mafketis
4 Jan 2019  #438
Irish men for many years in Britain were regarded with significant suspicion and were regarded as potential terrorists
Wow... so invading a country and trying to stamp out its language and culture doesn't make it's people feel grateful to you? Even if it largely works? Who'da thunk it?

There's probably a message about the middle east in there somewhere...
bolek_tusk
4 Jan 2019  #439
the same morons who voted Brexit
I voted for Brexit because I didn't want Germany ruling the UK! 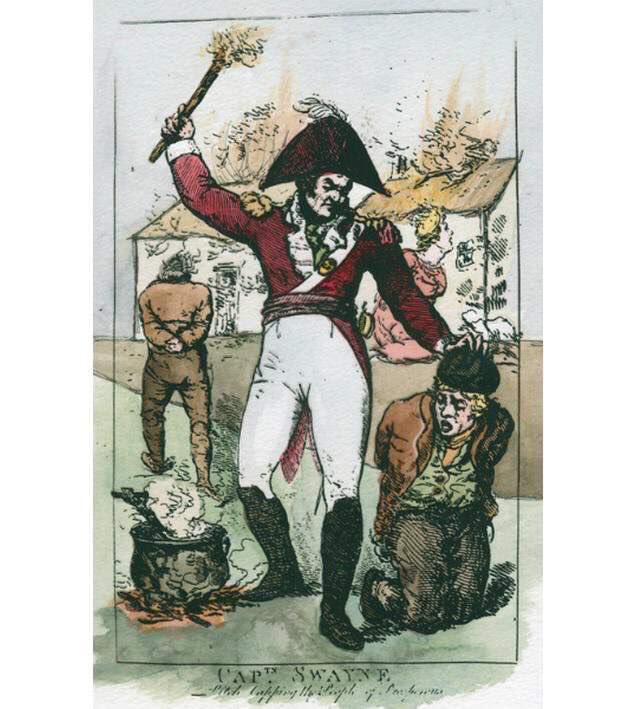 Pitchcapping was a torture method used by the British on Irish people. Hot tar would be poured into a cap and then placed on the head. It would then be rapidly ripped off.

The origin of Irish terrorists, that is, why they became.
cms neuf
4 Jan 2019  #441
You don't like Obama telling you who to vote for but you don't mind when Putin tells you ?

I'm not sure if you are Polish citizen but if you are not then one side effect of Brexit means that it is unlikely you will be able to settle here - You would not get a work permit.
Tacitus
4 Jan 2019  #442
the same morons who voted Brexit
@bolek_tusk

I mean that with the Royals being actually german is an old hat...
Dirk diggler
4 Jan 2019  #444
It's not quite the same. And it's not just about numbers killed.
You're right it's not *just* about bodies but nonetheless murder/killing is murder/killing and as stats and facts prove Muslims have piled more bodies in Europe, and the rest of the world in recent decades, than any sort of white terrorists or other religious groups.

But you're right there is a difference. Atleast the parties involved in the troubles tended to have jobs and had a sense of community. They also fought for something far more noble than junkie customers, a woman several men are simultaneously involved with, or because someone insulted them. Not so much here...

Then again I am biased as the IRA is viewed in a more positive light in the US than in UK especially due to the large Irish population here. I view them in the same light as the AK - ordinary citizens fighting an occupier
Tacitus
4 Jan 2019  #445
facts prove Muslims have piled more bodies in Europe, and the rest of the world in recent decades, than any sort of white terrorists or other religious groups
Oh really?

en.m.wikipedia.org/wiki/Bosnian_genocide
Not a religious or terrorist group, that's a state actor. Again I'm lookiAnd even then I'm referring to more recent years. But even IF we consider the actions of a state actor in the Bosnian genocide, the number of bodies is still far less than the tens of thousands Muslims kill around the world every year. And if we look at history as a whole Muslims

Killed 270 million over the course of 1400 years. That's more than Nazi, commies, and basically any group, country, terrorist, etc
Atch
4 Jan 2019  #447
the large Irish population here. I view them in the same light as the AK - ordinary citizens fighting an occupier
Well you will find that those views are not shared by the people of Ireland, North and South. And you really must understand that your view is an uninformed one as you have only the most superficial knowledge of the history and politics of Ireland.

Anyway, this thread is about Northern Ireland's situation post-Brexit, not about immigration or terrorism. I don't know how it's ended up being about Muslims again.
johnny reb
4 Jan 2019  #448
Because the Muslims hit the soft targets first (non-religious) like they did the U.K., France and Germany.
The second wave of attacks will be against the strong faith Catholic countries like Poland and Ireland where there will be much more resistance to the said "Holy War" against Christians.

Most likely will happen in the next generation..... when they are the deep rooted majority of said countries.
Good chance Atch that you will have a grandson named Abdul a Bad. .
Dirk diggler
4 Jan 2019  #449
one as you have only the most superficial knowledge of the history and politics of Ireland.
Of course. I never said I was an expert on Irish politics. Nonetheless, my knowledge or lack thereof doesn't change facts.

Anyway, this thread is about Northern Ireland's situation post-Brexit
Indeed. One of the reasons why Brexit came about is because tens of millions of British wanted more control.over their borders and immigration policy. Furthermore, I believe it was chemik that pointed out most the immigration has come from Commonwealth and non eu countries. That was the topic over the past page or two began.

Also, the border issue is a sticking point in Brexit negotiations due to the good Friday agreements which the Ira was part of.

Speaking of which, does Ira and spinoffs still control territory? How many members do you think they have I'd say several hundred real members with several thousand supporters at most. Are Republic ideals and groups like Ira popular amongst the youth, specifically the more nationalist ones?
mafketis
5 Jan 2019  #450
don't know how it's ended up being about Muslims
By their obsessions ye shall know them...