Rich Mazur
15 Nov 2018  #31
Poles would again come to Serbs
This is getting quickly on my nerves.
Serbia is one fifth of Poland. What can Poland get from a midget that was just beat up and cut up into smaller and irrelevant pieces?
Crow
15 Nov 2018  #32
Serbia is one fifth of Poland.
And what are Poles? They are Serbs (Sarmats). Serbs of Poland can`t be gathered and united within Poland if Poland is antagonized with Serbia. Its just so obvious. To Poland, Russia and Germany are outside problems. If Serbs become problem, it will be internal problem, thing from within and no defense from it.

This is getting quickly on my nerves.
Why? Serbia didn`t stab Poland in the back. It was opposite. Tusk did it. Kaczynksy was against it and made scandal of it even at UNGA and then Kaczynsky died and Tusk got his EU career.

Plus, all I said above on unity of Orthodox, Catholic and Muslim Serbs is a fact. Croats and Bosniaks are false nations. Here in the region people already awakening and returning to Belgrade. We will make it and re-unite again and then what. Our unity shall guaranty that we don`t obey neither to Rome, neither to Constantinople, neither to Mecca and Medina. When that happen there won`t be more powerful state in Europe and wider, in moral, in military, in economic, in any sense. We will reclaim all our territories and all what was stolen from us in centurions. Our history included.

You heard Jews. Netanyahu already openly speaks that Serbs represent last remains of original Sarmatians, real native Europeans, what are all Slavs but old core was exactly where Sarmatian name survived, in Serbia. You heard Hungarian Orban. He said, ``you Serbs were the top and you will be top again, then you shall remind yourself that Hungarians were on your side when was decisive``. Orban is wise. Netanhayu is wise. Trump is wise. Putin, too. Etc. Only Duda is stupid. Same as his fellows Micron, Merkel and Theresa.
Crow
15 Nov 2018  #33
Eh, Serbia is now in its era of partition. As if Poland was that strong when existed in its own era of partition.

You yet have to see. We are coming back. We shall expand in any sense. For now, we are satisfied to have more tanks then France and Germany together. About 300 active tanks and some 700 that needs refit and upgrade. That we keep in reserve and will give cutting edge technology to it when needed.
Tacitus
15 Nov 2018  #34
If the number you mentioned here is true, Serbia would have less active tanks than Germany. No doubt they are also mostly outdated.
Crow
15 Nov 2018  #35
Who knows what is truth man. Both of us speak of things from public media.

In any case few days ago Serbia had public military maneuvers, where foreign guests were present. More then 8.000 soldiers were involved and, among other armament, around 700 armored vehicles of which 100 were tanks. Because of 100 years since end of WWI. I`m not expert but I would say those tanks are among 5 top in the world.
Miloslaw
15 Nov 2018  #36
by throwing Serbia into every post you are losing credibility
Agreed 100%.
Some people here seem to like him,but I cant understand why.
For the rest of us he is a single minded,obsessed,repetitive bore.
Miloslaw
15 Nov 2018  #37
The thought of Serbia and Germany with lots of tanks makes me feel uncomfortable.
I don't trust either of them.
Crow
15 Nov 2018  #38
Fear is good for soul. But, forget Germany. Its past.
Miloslaw
15 Nov 2018  #39
More nonsense from a crazy Serb.....NOBODY CARES ABOUT SERBIA!
A small,violent Balkan country.
Crow
15 Nov 2018  #40
I eat pop corn, man. The one nervous here is you, seams to me.
Miloslaw
15 Nov 2018  #41
And forget Serbia too.It doesn't`matter.Nobody cares.
Miloslaw
15 Nov 2018  #42
Popcorn is bad for you Crow......better to eat a good Serbian sausage.....now that is one thing Serbs are good at.......great sausages....

Forget political influence......Serbs should concentrate on exporting their excellent sausages.
Crow
15 Nov 2018  #43
Sausages are always good. But you can`t eat sausages and walk around seducing females. Plus, forget politics when talk to females.
Crow
15 Nov 2018  #44
My country is in era of partition. Some people have understandings. Some don`t.
Rich Mazur
15 Nov 2018  #45
This is getting quickly on my nerves.
What's getting on my nerves is your constant inclusion of Serbia in every post. Try to forget Serbia and your posts will improve to the point where non-Serbs may actually relate to and comment.
Rich Mazur
15 Nov 2018  #46
With the average IQ here as high as it is, that is not necessarily the kiss of death. Serbia is.
Miloslaw
15 Nov 2018  #47
Yeah,Serbia is the kiss of death...
Crow,I think you have outstayed your welcome on this forum.
Miloslaw
15 Nov 2018  #48
@Rich Mazur

Agreed 100%.
Serbians are great sausage makers but not great leaders.
Serbia should concentrate on what it is good at.....making sausages.....
Miloslaw
15 Nov 2018  #49
Sausages.
That is all Serbs can offer the world.
Joker
16 Nov 2018  #50
What's getting on my nerves is your constant inclusion of Serbia in every post.
What is even more baffling is...

He's being doing this for over 10 years and they (mods) don`t do anything at all about the non stop spamming, hijacking and ramblings of this mad man.

Many of my posts have been sent to the bin for not relating to Poland.

Did you see when he attaches his pagan 4 headed horse demigod to Jesus?

Most Poles see past this nonsense and it really makes me wonder about why its continually allowed on this forum for over a decade?
Bratwurst Boy
16 Nov 2018  #54
allowed on this forum for over a decade?
A tradition? :)
Ziemowit
16 Nov 2018  #55
He's being doing this for over 10 years and they (mods) don`t do anything at all about the non stop spamming, hijacking and ramblings of this mad man.
This is simple. The forum respects the rule of free speech, so even if you want to judge his talk as "ramblings of a mad man", he has the same right to express his opinion as he has the right to call your talk in the same way. Who is the one to judge someone's talk as "ramblings"? Is it you, is it Trump, is it Obongo or is it someone else?

he attaches his pagan 4 headed horse demigod to Jesus
Slavic gods were not "horse demigods". They were either 3- or 4-headed "human" gods. There was once a white horse on the now German island of Rügen (Slavic name of the island: Rujana) which the Slavic people believed to be a saint horse.

he talks alot about Poland's future. He has a vision of tomorrow for all Slavs
If I were you, I would be careful now. Crow's vision for the Slavs includes a "re-slavisation" of East Germans. Wasn't Köpenick - Kopnik; Treptow - Trzebiatów, Spandau - Spędów; Neukölln - Nowe Kolno; Pankow - Panków; Schwerin - Zwierzyn; Rostock - Roztoka; Sassnitz - Sośnica etc., etc. once? 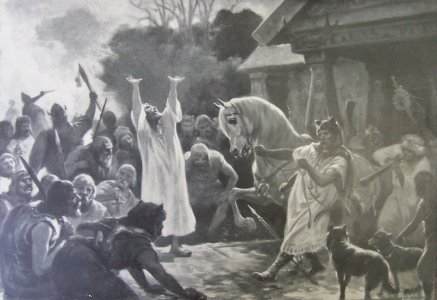 'The white horse of Rügen' by Józef Ryszkiewicz, 1890
Bratwurst Boy
16 Nov 2018  #56
If I were you, I would be careful now. Crow's vision for the Slavs includes a "re-slavisation" of East German
Oh I know all about it...I'm one of those who have known him for a decade! :)
Rich Mazur
16 Nov 2018  #57
Who is the one to judge someone's talk as "ramblings"? Is it you....
Yes, it's me. If he can "ramble", I can un-ramble.
Tacitus
16 Nov 2018  #58
Well, I guess his rambling is somewhat amusing to most here. Though I doubt that if we had people from Croatia or Kosovo here they would agree. With having become victims of Serbs who were driven by the same madness that Crow exemplifies and all that. Not to mention with his denying of Serbian crimes, and gloryfying Serbian war criminals. Something I thought would be more contested on a Polish forum.
johnny reb
16 Nov 2018  #59
Every country in the world can be contested.
What country you from Tacitus ? (I see you were to embarrassed to put it in your profile)
Hells bells the United States Military Complex $$$$ along with the E.U. have killed millions of innocent people and got away with it.
No worse then what Serbia did.
Are you, Crow or me responsible or have a say about our countries history ?
No, we are just a fun family here b.s. each other how great the country we live in is.
I happen to like Crow's sense of humor and if I didn't I would simply skip over his posts.
Then we die and none of this trivial b.s. matters does it.
Tacitus
16 Nov 2018  #60
(I see you were to embarrassed to put it in your profile)
Lots of assumptions here. I simply never bothered to do so, but I never made a secret of my nationality.

people and got away with it.
Yet they are often called out on it on this forum.

Then we die and none of this trivial b.s. matters does it.
Well, unless one day we hear in the news that a crazy Serbs commited a suicide attack on a Kosovo border crossing, shouting "For Svetvoid". ;) Not that this in any way likely, but it can have an influence on people.

I happen to like Crow's sense of humor
I admit that I find some of his views, e.g. his megalomania regarding Serbia amusing. However the fun stops for me whwn he starts insulting the victims of Serbian crimes. I saw the graves at Srebenica, and I visited several KZs. Just as I would never make any attempts to downplay German crimes, I would never downplay other historical atrocities. The reason I am surprised that this is tolerated on this forum is because quite a lot of posters have in the past shown great emotions when they thought that Polish suffering was belittled elsewhere. If you take offense at the term "Polish Death Camps", you should not shrug when someone rewrites history regarding Srebenica.