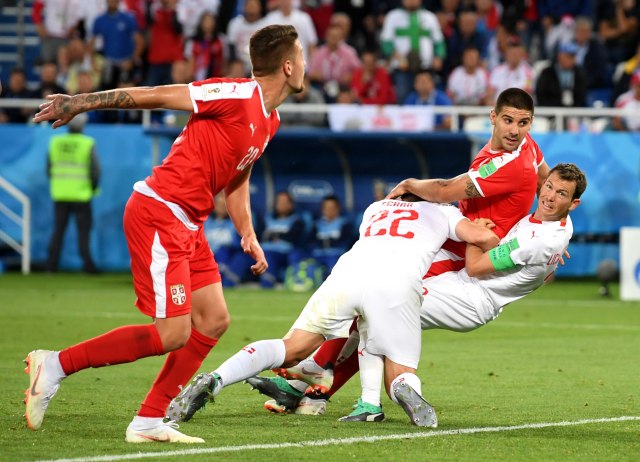 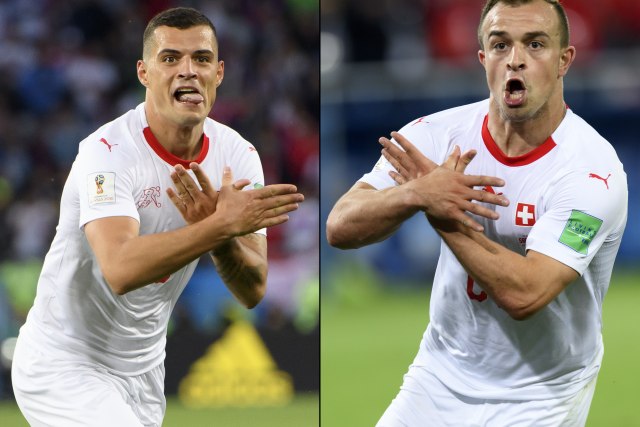 On all that add comment of EU representative on Kosovo these days that Albanians only feel necessity to repay debts to Serbs. What debts? They started terrorist rebellion of radical Muslims, while NATO and EU sponsored it and helped them, for their own aims. Hey man imagine how speak EU representatives- that Albanians repaying debt to Serbs. That is EU. Utterly evil and morbid thing. 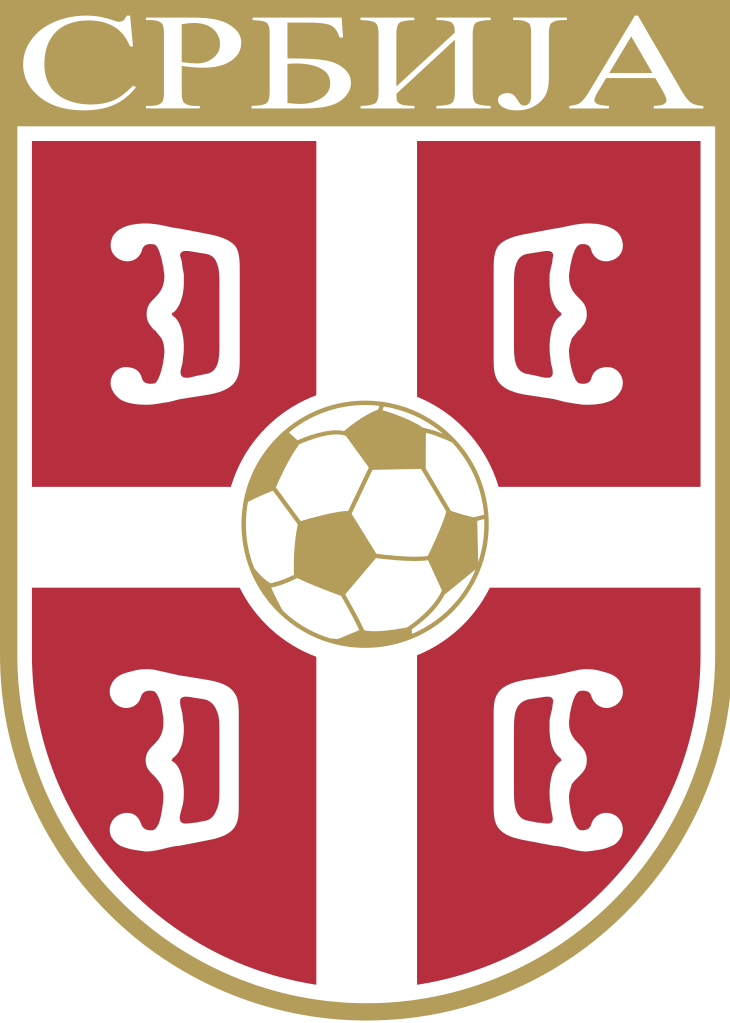 Slavisa Kokeza says Serbia were victims of a "brutal robbery" during Friday's loss to Switzerland, accusing Fifa of "directing" officials to work against them.

"We will send a protest to Fifa today," Kokeza told the BBC on Saturday.
bbc.com/sport/football/44589162 According to Serbian media reporters this Polish girl wins the World Cup contest.
Crow
27 Jun 2018  #157
I hope she come and support Racowie today in Moscow, against Brazil. Only her tits may give strength to our boys.

Tits or no tits, its bye bye. It will be better next time.
delphiandomine
27 Jun 2018  #158
Sorry to see this, Crowie. Serbia play nice football, and I've always had a soft spot for Red Star Belgrade.
Crow
27 Jun 2018  #159
Thanks but, its a sport. Essentially, its even normal. For too long Serbia is world and European champion (or sometimes among best) in water polo, volleyball, handball, basketball. Our players and experts among best not only in Serbia but all around the world. We are among best in tennis, kickboxing, wrestling. Good football school- our players playing in best European sport clubs, our trainers among best in Europe. Present nicely in athletics, shooting. Truly, considering number of populace, Serbia is strongest in Europe regarding sport. World power regarding sport, actually. What Brazil have but football? Switzerland? Switzerland have Serbian for football trainer.

Woa, I didn`t expect this... oh, disgusting, f***.... Brazilians assaulted Serbian females during mach. Serbs intervened then, it was a brawl. These Latinos are really dirty. But to assault a female with a fist... I have no words. I hope that our guys gave them pain 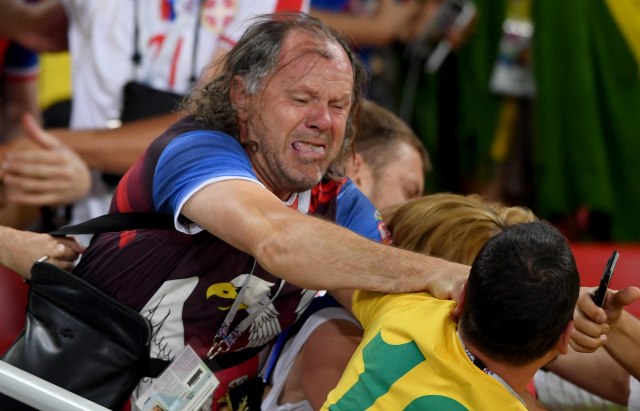 And now spot how Serbians behave with Brazilian woman >>> Hot kiss >>> Serbian fooball players lost match against Brazil but this Serbian won his Brazilian girl >>> presumably for that day or to say night eventually >>> or who knows for how longs, people founding their life partners in most impossible places >>>

Mixed with Brazilian fans he got to her and seduction occurred. He risked much. Proof that crazy bravery bringing great prizes. What did he told to her, what you think? Maybe he told her; ,,Look, Serbian flag is bigger then Brazilian. Much bigger.``
Crnogorac3
3 Jul 2018  #160
Being English, I know how Poles feel today in losing in such an embarrassing way.

Coach Adam Nawalka is fired by the PZPN after being 5 years in charge of Poland National Team since November 2013.

Do you think this England squad can go far in this World Cup? And end years of pain & dissapointment for the England supporters?

England vs. Colombia, again a very strange decision by FIFA to choose an American referee to officiate in this match. ;) I wonder if the Colombians will complain.
Crnogorac3
3 Jul 2018  #161
thesun.co.uk/world-cup-2018/6412063/mark-geiger-england-colombia-referee-world-cup-american/amp/

Regardless of everything, this American referee Geiger is by far the worst to officiate at this World Cup. He has lost control of the match, started to give calls that he should and that he should not... He has lost the plot completely, and now it becomes a very dirty game.

HAHAHAHAHAHA! THEY ARE COMING HOME!!!
Joker
4 Jul 2018  #163
Whats with all the fake Injuries in Soccer? A player barely touches another opponent and they fall to the ground pretending to be in agonizing pain? It reminds me of fake professional wrestling or they should win an academy award for best dramatic actor.....LOL

Im thinking women's soccer is much tougher! haha
Dirk diggler
4 Jul 2018  #164
they fall to the ground pretending to be in agonizing pain?
I think they're encouraged to fake injuries as a strategy. Still though it's pathetic. How are you gonna call yourself a man when a dude barely touches you and now you're in the fetal position crying like a lil b1tch? Even in men's volleyball basketball etc they don't do that. Idk why in soccer that happens the whole time. Id be embarrassed as he'll

Contact sports are better imo. Pussies don't get far in them. I'll still take soccer over golf but I like hockey, basketball boxing and mma the most..
Rich Mazur
5 Jul 2018  #165
God, please, help Russia win.
Joker
5 Jul 2018  #166
How are you gonna call yourself a man when a dude
Just playing soccer seems feminine in the first place, so its not much of a stretch to associate it with bogus sports like wrestling. Only little kids play soccer in the USA and by the time they're out of grammar school its on to real sports like Hockey, Basketball and Mens Football.

Soccer is more like a side show, fake entertainment. It is funny watching all the drunk inbred hooligans beating the crap out of one another. haha
dolnoslask
6 Jul 2018  #167
Just playing soccer seems feminine in the first place,
Interesting take I never used to pay any attention to American football until I lived in the US where had to find things to do at weekends.

My take on things is that professional American football (British rugby with the rules softened up) is a bit of a farce, you have two sets of players per side offence and defence dressed up with tons of padding (you don't dress up in helmets and shoulder pads like some tart out of the TV series Dallas to play rugby) the game seems to have at least 200 players each side where no one could possibly get tired especially with the switch of offence and defence.

American football has so many interruptions due to waiting for tv adverts to finish that an announcer has to tell people when to cheer, which makes it even harder to focus on the game or find any interest due to lack of continuity. Football (you call it soccer) on the other hand is solid action and the players have to be fit to run the distance, there no fat whales at the back that need constant rest as in american football.

But what I found more interesting was the tailgate parties and playing washers that was awesome much more fun than watching the game.

Having said the above I went to a few high school games that I found interesting there were fewer breaks between the action and the whole school seemed to be involved, even the kids who couldn't play in the game were out marching and playing instruments.

Just my observation as an outsider.
Rich Mazur
6 Jul 2018  #168
Soccer is more like a side show, fake entertainment.
It's the scores like 0:0 that make soccer anti-American. For the money, we demand action and 0:0 ain't it.

It's like watching a TV test pattern for 90 minutes.
Miloslaw
6 Jul 2018  #169
I have to agree with Dolno.American Football is Rugby for wimps and the constant start/stop of the game makes it very boring,no fluidity at all.

As for Baseball,we used to play a version of that in The UK called Rounders.It was largely regarded as a girl's game.

I like Basketball,plenty of action and fluidity.
Whilst I agree with some of the criticisms made here about Soccer,it is the worlds favourite sport by miles and the fact that sometimes there is a lack of goals makes the ones scored extra special.
cms neuf
6 Jul 2018  #170
I think there has been only one 0-0 draw in sixty games. And what money are you talking about ? it's free to air in almost every corner of the globe.

American football is great and Soccer is great, though more chance of a boring game - they are different things but you can like both.
Rich Mazur
6 Jul 2018  #171
Anyone with an extra 20 pounds should not be allowed to watch sports. Like in those "sports" bars.

Unless we are talking about weightlifting - one ounce per lift.
Joker
7 Jul 2018  #172
the tailgate parties and playing washers that was awesome much more fun than watching the game.
That is the best part for me as well!

Its more fun sitting in the bleachers, drinking beer, checking out the hot women at a Cubs game. If you ever get a chance to visit Chicago, put this on your list of things to do! Its baseball, but you wont care at all. Its just a huge party:)

I have become rather bored with American pro sports ( especially football) and their pompous athletes along with really bad disrecptful attitudes.

As for Baseball,we used to play a version of that in The UK called Rounders.
Its a bit more sophisticated than rounders. Tons of rules and takes a lot of skill, but if youre not born into it...zzzzzzz Unless youre Japanese, they love it!

Like in those "sports" bars.
There is nothing more annoying than a fat armchair quarterback with a cig hanging out of his mouth.
dolnoslask
7 Jul 2018  #173
btw....what is washers?
Invented in Texas played allot around Houston

en.wikipedia.org/wiki/Washer_pitching
Joker
8 Jul 2018  #174
Invented in Texas played allot around Houston
Something like this you would never see in Chicago, its like a totally different culture up here.

They play this game called bags, bago or cornhole now. Its really popular for tailgating and BBQin

Lets play Cornhole lol
Joker
8 Jul 2018  #175
I first want to congratulate England on their advancement into the finals!

I was going to try and make a hooligan joke and the first thing popped was this video about psycho soccer serbians, WOW!!

Is it me or is she getting Pfuglier?? lol
Rich Mazur
9 Jul 2018  #178
All team sports should be banned. Does anyone riot after Wimbledon finals?

Even the language "x beats y" is sick and a gross embellishment of a simple fact that a round ball ended up in a net a couple of times. And for that, all civilized life stops as can be seen in the photos of empty malls. Unreal.
Crow
11 Jul 2018  #179
German media are like obsessed with Croatia. Even when criticize politics involved in sport there, they can`t avoid to be proud with loyalty of Croatian society and deep dedication to German approach. Its a warm relationship of master and apprentice. What are Germans reluctant to say, somebody from Croatia will say. Its where German spear would hit if just get chance.
dolnoslask
11 Jul 2018  #180
England just lost to a European holiday resort, oh dear. glad to see England back on form.

Ah well I was lucky enough to see England lift the world cup, once , doubt I will ever see it again.